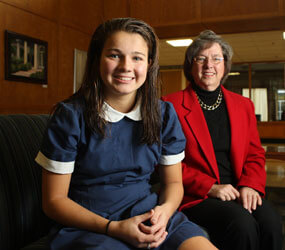 By Paul McMullen
Catholic Review Staff
Twitter: @ReviewMcMullen
Becca Meyers does not consider herself a deaf swimmer.
The Notre Dame Preparatory freshman is a swimmer who just happens to be deaf.
Meyers missed the first three weeks of school in September, albeit with a good excuse. Then 14, she was the youngest member of the 220-person American contingent at the 2009 Deaflympics in Taiwan.
After earning a bronze medal in the 4×200-meter relay and representing her country in six individual events at a quadrennial competition that attracted more than 4,000 deaf athletes from 81 nations, Becca rapidly got up to speed in the classroom, diving into a load of nine courses.
That resolve is typical.
“Becca just has this spirit inside of her,” said her mother, Maria Dachille Meyers. “Being our third child, we couldn’t hold her down. We’re skiers, and when Timmy (now a junior at Virginia Tech) went down the black diamond as a kid, Becca was right behind him. Nothing holds her down. She’s such a special gift.”
In the pool, Becca is a freestyle ace who struggles only with the backstroke. She was born with Usher Syndrome, which causes hearing loss and progressive vision loss.
“I can’t see the flags, I miss them and swim into the wall,” Becca said of the warnings for backstrokers. “I played soccer and softball when I was little, but I couldn’t see the ball, and kept tripping over myself. I loved being in the water.”
The first in her household to swim competitively, Becca won her very first race, a 25-yard freestyle, in 2001. The next year, she joined Loyola Blakefield Aquatics and has absorbed instruction from the likes of Keith Schertle and Tom Himes, among the first coaches of Michael Phelps.
Before Phelps became the greatest Olympian ever, Maryland was an age-group force in swimming. Several top 10 rankings among the state’s 13-14 girls earned Becca a spot at the Deaflympics.
She was placed on the U.S. squad despite missing the 2008 qualifying meet, which conflicted with her receiving a new cochlear implant.
The high-tech hearing aid comes with a wireless microphone transmitter that Becca hands to each of her teachers. She is totally deaf on the deck and in the pool, as she swims without the device, which made her eighth grade at St. Joseph School in Cockeysville fly by.
“Before I got the new implant, I used to have a (speaker) box on my desk, I’d have to lean over to hear sometimes,” Becca said. “I can hear a lot better now, the microphone the teachers use goes right into my ear.”
Her sister Lisa, a freshman at the University of Delaware, was in the NDP Class of 2009, and her mother was in the Class of 1981.
“I wanted to go here since I was in the first grade,” Becca said. “I worked so hard to get in.”
Becca, her mother and her father, Mark, can’t say enough about what her parish school at St. Joseph, under the direction of Religious Sister of Mercy Anne O’Donnell, did to make that a reality.
“Sister Anne was her biggest advocate,” said Becca’s mother. “She took in a deaf kid starting with kindergarten, and we’re so grateful.”
Mainstreamed educationally, Becca does not know sign language, which had her at a disadvantage at the Deaflympics. Arriving at NDP in late September, she quickly became one of the girls.
“We don’t have a lot of experience with hearing-impaired students,” said Marianne Reichelt, Becca’s English teacher, “but this technology is so unobtrusive, and she is so eager to excel.
“Over the summer, she met with her teachers and received some of the material she might miss in September. When she got here, we hadn’t gotten to stuff that she had covered on her own.”
Reichelt, the department chair, said that Becca is a great communicator.
“She’s a lovely advocate for herself,” Reichelt said. “I wish girls who don’t face half of her challenges had her ability to say ‘this is what I need.’ She’s got a natural curiosity, and is a treasure to have in the classroom.
Becca celebrated her 15th birthday Nov. 20, taking in the “Twilight” sequel with friends. Already a veteran of international swimming, she looks forward to making her debut for the Blazers and coach Theresa Byrd Dec. 7, against John Carroll.
“Becca is the epitome of an NDP girl who always strives to be her best,” said School Sister of Notre Dame Patricia McCarron, the NDP headmistress.

UPDATE: Becca was honored with an ESPY Award for the Best Female Athlete With a Disability July 15, 2015 in Los Angeles, California.