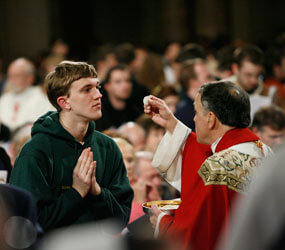 WASHINGTON – With the fate of the current health reform bills in doubt, the next challenge is to convince members of Congress not to abandon the health reform effort entirely, Cardinal Daniel N. DiNardo of Galveston-Houston said Jan. 22.

The cardinal said he was speaking both as chairman of the U.S. bishops’ Committee on Pro-Life Activities and as head of an archdiocese that has “the highest number of uninsured in the country.”

“We need health reform,” he said in a briefing with Catholic media at the headquarters of the U.S. Conference of Catholic Bishops in Washington. “We’re concerned that there may not be” continued momentum in Congress “to allow more people to be insured,” he added.

Cardinal DiNardo was speaking shortly before the March for Life marking the 37th anniversary of the Supreme Court’s Roe v. Wade decision legalizing abortion. The day before, House Speaker Nancy Pelosi said there were not enough votes in the House to pass the Senate-approved version of health reform legislation.

With the Jan. 13 election of Republican Scott Brown in Massachusetts to fill the Senate seat held by Democrat Ted Kennedy, Democrats lost their 60-seat supermajority and passage of any amended health reform bill in the Senate was put in doubt.

Cardinal DiNardo noted that the bishops had never endorsed a particular health reform bill but have instead “cited our preoccupations” with existing legislation – a role he said they would continue to play as the debate moves forward.

At the briefing, Richard Doerflinger, associate director of the bishops’ pro-life secretariat, said the challenge on health reform “has shifted enormously in the last week.”

“We now don’t know if there will be a bill at all,” he said. “Now we might have to encourage Congress not to give up on this moral imperative.”

In simplest terms, the bishops want to see health reform in which “everyone gets cared for and no one gets deliberately killed,” Doerflinger added.

Cardinal DiNardo and staff members of the pro-life secretariat also addressed a variety of current pro-life legislative challenges and upcoming initiatives during the briefing.

The cardinal predicted “a very intense pro-life contribution” to the immigration reform effort, expected to be one of Congress’ next major priorities.

Just as the heads of the USCCB committees on Migration and on Domestic Justice and Human Development have played a strong role in the bishops’ health reform efforts, the pro-life office will be involved in lobbying for immigration reform, he said. Ecumenical coalitions also will play a key role, he said.

Doerflinger said consideration of the next set of appropriations bills is a couple of months away, with “dozens of riders” likely to be needed to preserve current practices on federal abortion funding.

Another issue that is “rearing its ugly head again” is assisted suicide, with various state courts and legislatures moving toward permitting it, he said. The last major push by the bishops on that topic was in 1997, he added.

Some in Congress had indicated that they would try to further expand federal funding of embryonic stem-cell research this year, Doerflinger said, but “I don’t think that is going to happen now with all the science moving in the other direction.”

“The issue is fading as people find out that the bishops were absolutely right about what is most promising medically” – adult stem-cell research, he said.

Deirdre A. McQuade, assistant director for policy and communications in the pro-life secretariat, unveiled a series of ads aimed at helping those affected by abortion – including fathers and grandparents of unborn children – find healing and peace.

“This is the first time we are reaching out to men,” who might range from those who are grieving because they never knew the woman was pregnant until after an abortion to those who “dragged the woman by her hair” to get an abortion and now feel guilty, McQuade said.

One of the ads pictures a young man and the slogan, “I can’t believe I let this happen.” Then it says, “Never let your past keep you from God” and the tagline from each ad: “Come back to God, who is love and mercy.”

The ads, in English and Spanish, have been placed in Washington Metro subway trains for a month surrounding the Jan. 22 Roe v. Wade anniversary and will be made available to dioceses for their own campaigns, McQuade said.