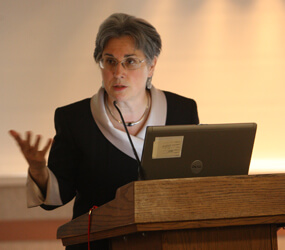 Catholic health care providers need to stand up and defend their right to practice medicine in a way that’s consistent with their religious convictions, according to several speakers at a symposium on conscience rights held May 9 at St. Joseph Medical Center in Towson.

Archbishop Edwin F. O’Brien hosted the gathering, which attracted more than 200 participants from throughout the region.

“The culture is now coming after us,” said Dr. John Brehany, executive director of the Catholic Medical Association. “They want us to participate, and they want us to do the things they do. Alternative values are being put forward and we need to respond.”

Dr. Brehany cited attempts in California to criminalize the refusal of doctors to participate in abortion. He called that effort and others like it a blatant attempt to make abortion coverage and dispensation of contraceptives a “standard of care” required of all medical providers.

Casey Mattox, litigation counsel for the Christian Legal Society, highlighted a proposal by the Department of Health and Human Services to rescind a conscience protection regulation for health care workers who refuse to participate or refer for abortions.

In the keynote address, Dr. Janet Smith, Father Michael J. McGivney Chair of Life Ethics at Sacred Heart Major Seminary in Detroit, outlined the church’s teachings on conscience – emphasizing that conscience isn’t an opinion about what’s right and wrong; it is “listening to the voice of God within.”

“There is an erroneous view of conscience that says individuals independently are faced with their own truth,” Dr. Smith said.

Addressing the church’s teachings on sexuality, Dr. Smith said the sexual act “should express a willingness to have a lifetime commitment.”

“Contraceptive sex says I want momentary pleasure with you now and who cares about tomorrow,” she said.

Dr. Smith called the prescribing of birth control an “anti-woman act” because of the “serious health risks” associated with contraception. She noted that Johnson and Johnson spent $68 million to settle cases with women who suffered blood clots, heart attacks or strokes after using the company’s birth-control patch.

“We’re treating a woman’s body as if it’s defective,” she said. “The reality is that fertility is good.”

In a question-and-answer session at the end of the conference, Archbishop O’Brien addressed a question about why more Catholic bishops don’t take action against Catholic hospitals that compromise on conscience issues.

The archbishop said Catholic hospitals in the Archdiocese of Baltimore have a history of cooperating with the bishops because of a “great sense of trust” that’s been built up over the years. He said there are some institutions elsewhere that want to be Catholic only when it is convenient.

“It’s up to the bishop to expose that,” Archbishop O’Brien said. “If necessary, a public statement needs to be made.”

The archbishop called for education on every level about the church’s teachings on the sanctity of life and medical ethics. Those serving in health care ministry have the best access to laypeople to provide that education, he said.

Archbishop O’Brien said he hopes to make the conference an annual event.

“We have a real obligation to raise awareness in the Archdiocese of Baltimore given the centrality of the medical profession here in Baltimore,” he said.

Also during the question and answer session, Dr. John Bruchalski, founder of the Tepeyac Family Center in Virginia, said expanding abortion access is what’s driving the “Freedom of Choice Act,” legislation that has yet to be introduced in the U.S. Congress that would wipe out existing state restrictions on abortion and impede states’ ability to regulate abortion.

“There are only about 1,100 doctors who do abortions,” he said. “They’re looking for ways to increase those numbers.”