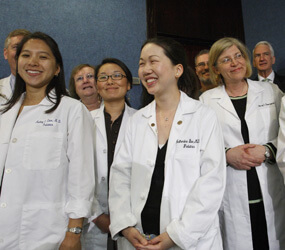 WASHINGTON – Dr. John T. Bruchalski would rather close the doors of his highly successful Fairfax, Va., medical practice than violate his conscience if he is forced to offer services that violate the basic tenets of his Catholic faith.

A pro-life obstetrician and gynecologist whose Tepeyac Family Center delivered 629 babies in 2008, Bruchalski is concerned that a Department of Health and Human Services proposal to rescind a conscience protection regulation for health care workers would force him to perform abortions or, at the very least, refer patients to physicians who offer the procedure.

Dr. Bruchalski told Catholic News Service he wants no part of that.

The rule, which took effect two days before President Barack Obama took office, codifies three longtime federal statutes prohibiting discrimination against health professionals who decline to participate in abortions or other medical procedures because of their religious or moral objections.

“From our perspective the heart of social justice is the Gospel of life,” Dr. Bruchalski said in an interview following an April 8 press conference hosted by Freedom2Care at the National Press Club.

“At the heart of freedom is the right of conscience, a properly formed conscience. If conscience becomes truncated or coerced or undercut, then every other right that we have as citizens becomes hollow,” he continued.

“We have to be obedient to our conscience, which is telling me to love God and love my neighbor. As Peter said, where else can I go?” he said. “I must be an active, alive Catholic physician and that will help health care and the nation at large, because I bring a perspective that ought to be heard. If they silence that, they’re silencing Catholics from being physicians.”

Dr. Bruchalski was not alone in his sentiments. He joined 40 other doctors, anesthesiologists, physician assistants, pharmacists and nurses – all donned in white coats or operating-room scrubs – who packed the press conference to address their concerns a day before a month-long public comment period on the HHS plan ends.

Freedom2Care, a coalition of 36 secular and medical organizations dedicated to protecting conscience rights, and the Susan B. Anthony List, which promotes and represents pro-life women in politics, are spearheading a campaign that has led to 36,000 comments being filed against the proposal.

A similar effort by the National Committee for a Human Life Amendment, an arm of the U.S. Conference of Catholic Bishops, has filed another 35,000 comments, according to Deirdre McQuade, assistant director for policy and communications in the bishops’ Secretariat of Pro-Life Activities.

Dr. David Stevens, CEO of the Christian Medical Association, told reporters that the group had sent Obama a letter detailing its concerns about the proposal as the press conference started. The letter said thousands of health care professionals “would be put at a crossroads in their careers” should the conscience rule be rescinded.

Among the 37 signers of the letter were Dr. Louis C. Breschi, president of the Catholic Medical Association and a parishioner of Immaculate Conception in Towson; Brian Burch, executive director of CatholicVote.org; Terese S. Collet, professor of law and director of the University of St. Thomas School of Law Prolife Center; and Austin Ruse, president of C-Fam, a Catholic family and human rights organization.

The rights of conscience are guaranteed in the First Amendment to the U.S. Constitution and rescinding those rights would send the country down a perilous road, Dr. Stevens said.

“When the state demands we surrender our conscience, it becomes totalitarian and dangerous,” he said. “As Hippocrates knew and some have forgotten, the moral integrity of health care professionals is the patient’s best protection, especially in a health care system increasingly driven by cost.”

Dr. Stevens also raised concern that a concerted effort by some organizations “to cleanse health care” of people who want to maintain conscience rights would force hospitals to close and push hundreds of thousands of doctors, nurses and pharmacists out of work.

Already, he said, many health care professionals are discriminated against for their desire not to participate in procedures they find objectionable.
“This issue isn’t just about abortion,” he said. “Right of conscience will become increasingly important with other health care issues looming ahead: euthanasia, genetic engineering, human cloning and more.”

Freedom2Care also released the results of a poll that showed 87 percent of U.S. adults surveyed believe it is important to ensure that health care professionals are not forced to participate in procedures to which they morally object. By 57 percent to 38 percent, adults oppose regulations that require medical professionals to perform or provide services to which they morally object.

The poll of 800 adults was conducted by The Polling Co. for the Christian Medical Association.

More information about Freedom2Care can be found online at: www.freedom2care.org. Comments also can be filed online through April 9 at: www.usccb.org/conscienceprotection.