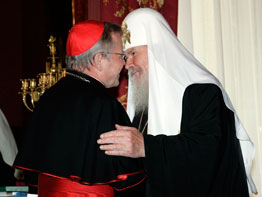 VATICAN CITY – The head of the Russian Orthodox Church, Patriarch Alexy II of Moscow, died Dec. 5 at his home outside the Russian capital. He was 79.

Although the cause of his death was not immediately made public, he had suffered from a heart condition and had been ill for some time.

Patriarch Alexy led the world’s largest Orthodox church since 1990. As primate of the Russian Orthodox Church, the patriarch was the spiritual leader of more than 110 million church members in Russia, the former Soviet republics and the diaspora.

He led the church through the difficult transition from the end of Soviet repression to an era of religious freedom and sought to revitalize traditional religious values in a society that was still grappling with the aftereffects of totalitarianism and the impact of newfound freedoms.

Pope Benedict XVI praised the patriarch’s efforts “for the rebirth of the church after the severe ideological oppression which led to the martyrdom of so many witnesses to the Christian faith.”

In a written message sent to the synod of the Russian Orthodox Church Dec. 5, the pope offered his “most sincere condolences” and said he “was profoundly saddened” to receive news of the patriarch’s death.

He recalled Patriarch Alexy’s “courageous battle for the defense of human and Gospel values,” especially in Europe.

In his message, the pope said he prayed the patriarch’s hard work would “bear fruit in peace and genuine progress – human, social and spiritual.”

Cardinal Walter Kasper, the Vatican’s top ecumenist, expressed his “profound sadness” at the patriarch’s death and prayed that he would “be rewarded for his long and dedicated ministry to the church he loved.”

Despite challenges and obstacles between the two churches, the patriarch held a firm desire to strengthen collaboration with the Catholic Church, Cardinal Kasper said in a statement Dec. 5.

“His personal commitment to improving relations with the Catholic Church, in spite of the difficulties and tensions which from time to time have emerged, has never been in doubt,” the cardinal said.

Cardinal Kasper said that during his many meetings with the patriarch the Orthodox leader would “always make a point of expressing his good will toward the Holy Father.”

He said Patriarch Alexy helped guide the Russian Orthodox Church during the post-communist transition and enabled it to emerge with “renewed interior vitality.”

“He was instrumental in fostering the enormous growth of dioceses, parishes, monasteries and educational institutions, which have given new life to a church sorely tested for so long,” the cardinal said.

Despite the late Pope John Paul II’s long-expressed desire to visit Russia, the Russian Orthodox under Patriarch Alexy never invited the pope to Russia. They insisted the patriarch would not meet the pope until they were satisfied that Catholics were not proselytizing in Russia.

Though still strained, Russian Orthodox relations with the Catholic Church improved greatly under Pope Benedict. After recent meetings this year with Russian Orthodox leaders, Cardinal Kasper, president of the Pontifical Council for Promoting Christian Unity, said historical tensions had been replaced by an eagerness to cooperate.

A meeting between Pope Benedict and Patriarch Alexy finally seemed possible, Cardinal Kasper said after a visit to Russia and the patriarch in May. Even though no concrete agenda for a visit had materialized, there were “many signs of reconciliation,” the cardinal said at the time.

Pope Benedict had praised the patriarch for his commitment to dialogue and for fostering better relations between Catholics and Orthodox.

In a letter delivered to the patriarch in May, the pope wrote, “It is with joy that I reflect on the experience of growing closeness between us, accompanied by the shared desire to promote authentic Christian values and to witness to Our Lord in ever deeper communion.”

Helping to bridge the long-standing divide between the two churches was the Orthodox church’s recent effort to seek cooperation on highlighting Christian values in an age of increasing secularism, on Europe’s common roots in Christianity, and on themes like the family, bioethics and human rights.

Born in Estonia in 1929 to a family of Russian emigrants, Patriarch Alexy was enthroned as patriarch in 1990, just a year after the collapse of the Soviet Union. He said his church had to work to help the Soviet people overcome bitterness left by years of repression.

When the Soviet parliament granted religious freedom in the country for the first time since the Communist Party took power 70 years ago, the patriarch took a leading role in revitalizing the country’s pastoral life.

He said the church needed help so it could reopen churches and monasteries, provide religious education, offer charity and carry out many other activities.

Even though he appealed for outside aid, he accused other religious groups, including the Catholic Church, of ignoring Orthodox needs and proselytizing.

The Vatican repeatedly has said it rejects proselytism and wants to be informed of any specific instances where Catholics are trying to entice Orthodox Christians to embrace Catholicism.

Some obstacles still straining Catholic-Orthodox dialogue included a disagreement between the Russian Orthodox Church and other Orthodox churches.