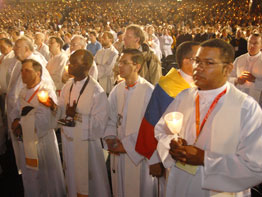 QUEBEC CITY – Christians “are hardly yet able to speak of a common table” when it comes to Communion, the Canadian Council of Churches president told a few hundred people at the 49th International Eucharistic Congress.

The Rev. James Christie, a minister for the United Church of Canada with years of experience in ecumenism, said he was humbled to be invited to the congress to offer a Protestant perspective of shared Communion. Cardinal Peter Turkson of Cape Coast, Ghana, provided the Catholic perspective.

Rev. Christie said his church believes in two sacraments, Communion and baptism, and there is “no place for local variations,” such as substituting white wine for red, or, as one parishioner suggested, using fruitcake instead of bread at Christmas.

Rev. Christie, who said he spoke as a Protestant but not for all Protestants, told a story about two couples from Bosnia-Herzegovina that his church sponsored during that country’s civil war. The wives were Christian, their husbands Muslim. The Christian wives always came alone to receive Communion.

One day, however, their husbands came forward to receive.

“I hesitated. I looked them in the eyes and I gave them the bread,” he said.

Though the United Church gives Communion to all baptized Christians, he said he still does not know whether the husbands had been baptized. But he said he did know that they knew and loved Jesus.

Rev. Christie said he would rather be called to account for giving Communion to those who were not qualified to receive than for excluding someone who was hungry for Jesus.

“The Lord’s table ought always to be more open than our own,” he said.

Cardinal Turkson told the story of a pregnant woman named Titi, who fled to Ivory Coast through dense jungle after her husband was kidnapped by Liberian rebels.

Her clothes in tatters, her body bruised and wounded, she finally arrived at a village and gave birth to a baby girl. She gave the baby a name that meant “I have wrestled with death to give you life.”

“What Titi did for her baby, Jesus did for us,” the cardinal said.

When Jesus broke the bread in instituting the Eucharist, it was a “death-dealing gesture, an act of killing,” he said. As a Jew, Jesus was familiar with the Old Testament prophecies he had come to fulfill, he said.

“Jesus’ death represents total filial submission to the will of the Father,” he said. His death “affirmed the Father’s right to the obedience of mankind.”

Quebec Anglican Archbishop Bruce Stavert said the Anglican Church had wide differences in theology and practice. He described it as “unity in diversity,” though he acknowledged that problems were presented by same-sex unions and openly gay bishops in the United States.

“Anglican tradition has had a clear understanding of what real presence meant in the sacrament,” he said. Anglicans have been less concerned with explaining how the change from bread and wine to Christ’s real presence takes place, he said.

Greek Orthodox Metropolitan Sotirios of Canada added, “The Orthodox church has always believed the Eucharist is the real body and blood of Christ.”