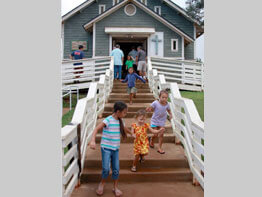 MAUNALOA, Hawaii – Sometimes it seems like the people of Maunaloa, a town on the small, rural island of Molokai, can’t catch a break.

The town’s 7,400 residents will tell you they have known more than their fair share of economic adversity over the years. They have weathered labor strikes, the end of the island’s pineapple industry, hotels folding, and the highest unemployment rate in the state.

But these self-described survivors are now facing their biggest challenge yet after this year’s closure of Molokai Ranch, the island’s largest private employer and landowner.

The ranch, which covers one-third of the island, included a wildlife park, hotel, golf course and agricultural property. Its owners laid off 98 workers this year, putting the island’s unemployment rate at 12.5 percent.

“Everybody knows somebody who worked at the ranch that got laid off,” said John Pele, who co-owns the Maunaloa General Store on the west end of Molokai, where the ranch was located.

The island’s struggles have led Catholic parishes in Molokai and surrounding islands as well as the Diocese of Honolulu’s Office for Social Ministry to expand their efforts to help those in need.

Last May, after Honolulu Bishop Larry Silva issued a pastoral letter on job loss, the diocesan social ministry office developed a 14-month plan to coordinate outreach efforts for those without work.

Maunaloa, a town of about 140 families, was at the center of the impact of the Molokai Ranch’s closure, with 38 residents losing jobs. The ranch-owned movie theater, gas station, golf course, hotel properties and cattle operations in and around Maunaloa all shut down.

Adding to the town’s troubles was a 178 percent increase in water rates Sept. 1 and recent word that Maunaloa School might be closing.

Sitting with his wife, Nani, on Maunaloa General Store’s front porch, Pele looked down the road and said, “Some days I’ll walk out here and it’s like being in ‘The Twilight Zone.’ There’s nobody, not even a car,” he told the Hawaii Catholic Herald, newspaper of the Honolulu Diocese.

Catholic efforts to help the community have included a drive for school supplies, canned food collections and an early Thanksgiving gathering at St. Vincent Catholic Church in Maunaloa where food baskets and gift certificates for turkeys were distributed. The church also sponsored a toy giveaway in mid-December.

“All of this is really a blessing because there are a lot of people that are just barely making it,” said Janeel Hew, a St. Vincent parishioner. “With the holidays coming up, it gets really depressing.”

Maunaloa retiree Irene Laemoa said her daughter was laid off from Molokai Ranch and her husband only has a part-time job, leaving “no money for special occasions.”

Laemoa said she had very limited holiday plans but was able to put something together for her grandchildren because of the parish food and toy drives.

But the church’s outreach hasn’t been confined to the holidays. The parish’s homebound ministry has expanded and the church built a room for a food pantry. The diocesan social ministry office also brought in specialists to train parishioners to help those affected by the ranch closure to seek financial assistance.

Janice Pele, who coordinates Maunaloa’s food bank and thrift store, said when she first heard that the Catholic Church was planning to support Maunaloa residents she didn’t believe it.

She said when the ranch closed “a lot of people came to the community and were telling me they were going to do this and do that,” she said. “They took all the information, and then they never did come back.”

“Finally, something like this (church outreach) happened. It was very overwhelming for me to the point where I felt like I wanted to cry, because I couldn’t believe the tremendous help people out there can be,” she said.