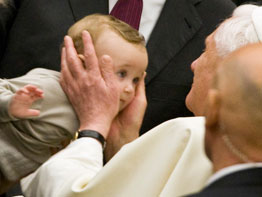 VATICAN CITY – The Catholic insistence on a close connection between faith and reason is based on the belief that God created human beings and is always close to them, Pope Benedict XVI said.

“The harmony between faith and reason means, above all, that God is not far off, he is not far from our reason and from our lives. He is close to every human being, near to our hearts and near to our intelligence,” the pope said Jan. 30 at his weekly general audience.

Continuing a series of audience talks about St. Augustine, the pope said, “As a child, St. Augustine learned the Catholic faith from his mother, Monica. But in his adolescence, he abandoned the faith because he could no longer see its reasonableness.”

For St. Augustine, the pope said, religions and philosophies that did not make sense of life and did not help people arrive at a truth valid for everyone were not worth pursuing.

St. Augustine was not looking for a God who was “simply the ultimate cosmological hypothesis, but was the true God, the God who gives life and enters into our lives,” Pope Benedict said.

Faith and reason are “the two forces that bring us to knowledge,” the pope said. People must believe in God in order to understand, and they must use their understanding in order to believe, he said.

Pope Benedict said that St. Augustine experienced the nearness of God “with extraordinary intensity,” and his own life story convinced him that those who move away from God move away from the truth of who they are themselves.

“One can find himself again only by encountering God; this is the way he arrives at his true self, his true identity,” said the pope.

St. Augustine’s conviction that people need to seek and to approach truth and that truth is ultimately found through knowing God is a teaching that people today need to hear, the pope said.

“Augustine encountered God and throughout his life he experienced him so much that this reality, which is precisely an encounter with the person of Jesus, changed his life, just as it has changed the lives of all those men and women of every age who receive the grace to encounter him,” the pope said.

“Let us pray to God to give us this grace, so that we can find his peace,” he told the estimated 5,000 people at his audience.