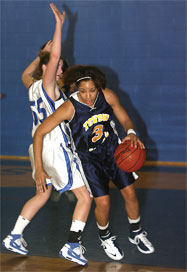 Hale is not only extraordinary on the basketball court, but also in the classroom, carrying a 4.1 GPA. Hale is also the student government president, senior class president and a member of the National Honor Society.

Hale has played four years of varsity basketball and volleyball, and has been highlighted numerous times as a League All-Star. This year she looks to play softball for the Owls before heading off to Drexel University on an athletic scholarship. Hale intends to major in physical therapy.

Hale began playing basketball at age 6, as her mother, Sandy Hale, was very involved in coaching and working with children in area basketball clinics and local leagues. Mrs. Hale currently serves as the Owls’ assistant coach and beams at her daughter’s accomplishments.

“I am elated and full of pride,” said Mrs. Hale. “Tyler’s hard work has finally paid off.”

Hale has stepped up offensively over the years, moving from a defensive stopper to an offensively-minded player who now averages more than 18 points per game and 15 rebounds. Hale has scored a double-double in all but two games this season and is 20 boards short of collecting her 1000th career rebound.

During the Roland Park game, Hale scored her milestone bucket with seven seconds remaining in the first quarter. Head Coach Jeff Palumbo stopped the game at that point and presented Hale with the game ball.

Palumbo said, “It’s great to see Tyler get some recognition for her scoring. Scoring 1,000 points is a pretty awesome accomplishment considering that, until this year, she has never had the opportunity to be the go-to offensive player. She has just been incredible.”

The Owls will head into the play-offs next week with an IAAM A Conference record of 10-4 in the league and 14-4 overall as of Feb. 3.