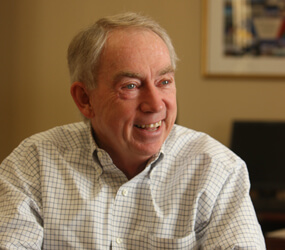 After a punishing winter storm buried Baltimore in mounds of snow several years ago, Angelo M. Boer knew Our Daily Bread soup kitchen would need some help. With its normal corps of volunteers shut in, the director of development and communications for Catholic Charities set out at 6 a.m. to help prepare the day’s free lunch for the poor.

When Boer arrived at his agency’s outreach center, then located on Franklin Street in downtown Baltimore, he was stunned to see his boss already there. Harold A. “Hal” Smith, Catholic Charities’ executive director, was busy getting the hot meal ready with a few other staff members.

Since it opened in 1981 under Smith’s leadership, Our Daily Bread had never missed a day serving a meal. The executive director wasn’t about to let that record die. People would go hungry if he did.

“That was typical Hal,” said Boer, remembering that Smith would repeat his service again and again whenever there was a need.

“It was a personal commitment on his part and not just because he was an executive,” Boer said. “He personally felt he had to be there to make sure the meal got out.”

Smith, the man who has led Catholic Charities through 33 years of remarkable growth and change, stepped down this summer as executive director. Invited guests will celebrate Smith’s leadership of Catholic Charities during a Nov. 3 dinner at the Hilton Baltimore.

As Smith prepares for retirement, his friends and colleagues are remembering him as a visionary leader who vastly expanded services to the poor and vulnerable in Maryland. For his part, Smith sees the last three decades as the product of the work of the Holy Spirit.

Smith arrived in Baltimore 35 years ago as the assistant director of an agency whose scope was mostly limited to children’s services, foster care, adoption and counseling. The Maine native had previously worked seven years for his home state’s Catholic Charities.

When Smith became executive director of Baltimore’s Catholic Charities two years after his arrival, the agency employed 350 people and had a budget of about $6 million. Today, the organization annually helps 200,000 people in 80 programs and employs 2,100 people. Its budget is about $120 million.

Smith believes much of Catholic Charities growth has come “organically,” and he pointed to Our Daily Bread as an example. The center that serves hot meals had its origins in the Baltimore blizzard of 1979. Because the poor had nothing to eat, religious sisters at the Basilica of the National Shrine of the Assumption of the Blessed Virgin Mary in Baltimore gave out free sandwiches to men who stood hip-deep in snow looking for a meal.

Seeing a critical need for a more organized approach to helping the hungry, Catholic Charities opened a building to provide meals and solicited a network of parish volunteers to keep it going. After Our Daily Bread started, it became clear that patrons needed help with shelter and employment – which led to programs like Christopher’s Place Employment Academy and My Sister’s Place.

In a similar way, as Baby Boomers aged and swelled the ranks of seniors needing affordable housing, Catholic Charities opened 20 senior housing developments throughout the region. As more immigrants came to Baltimore, Catholic Charities expanded its services to help them learn English and meet their health care and other everyday needs.

“Once one service was established, a continuum of other services developed because they were needed,” Smith said.

Smith acknowledged that it wasn’t easy for Catholic Charities to push in new directions. There was strong opposition to opening Our Daily Bread by those concerned that it would hurt the downtown business district. Smith undertook a legal battle that went all the way the state’s highest court before his agency prevailed.

After Our Daily Bread outgrew its location on Franklin Street, Smith began an ambitious campaign to relocate to Fallsway. It took nearly a decade of planning and raising tens of millions of dollars to make what is now Our Daily Bread Employment Center a reality.

Today, Our Daily Bread is the centerpiece of Catholic Charities’ many outreach efforts, serving hot meals to more than 700 people a day and providing resources to the homeless and unemployed. Smith said he is pleased that parishes have been “tremendously supportive” of Our Daily Bread. Volunteers from more than 60 parishes are involved in helping the center.

“We wanted people to understand poverty and what poverty meant to our community, even though you didn’t necessarily see that in your own neighborhood,” Smith said. “By getting many parishes involved, we extended the reach far beyond the physical location of the building.”

Pope John Paul II himself learned about the work of Catholic Charities when he had a meal at Our Daily Bread and heard from people who benefited from the agency during his 1995 visit to Charm City.

Our Daily Bread may not have developed had Smith not sought new forms of funding for Catholic Charities. The executive director worked with Archbishop William D. Borders to convince former Gov. Harry Hughes to provide full-cost reimbursement for Villa Maria and St. Vincent’s Center – Catholic Charities programs that care for abused children and children with emotional and behavioral challenges.

“That freed up the United Way money we had in those programs to allow us to establish Our Daily Bread, My Sister’s Place and Christopher Place,” Smith said.

The executive director didn’t stop there. To raise money and awareness for Catholic Charities programs, he started the biennial Dragon Boat races in Baltimore’s Inner Harbor that has become a huge success.

“I view fundraising as the ultimate educational experience,” he said. “If I ask you for $100, you may or may not give it to me, but if you are serious about listening to why that money will be helpful, you will learn something about the poor and about the needs of others.”

Richard Berndt, managing partner of the law firm of Gallagher, Evelius and Jones, said Smith’s legacy extends far beyond his fundraising prowess and the many new programs he established. Smith encouraged a culture of excellence, Berndt said.

“He changed the level of accountability and quality in every single agency,” Berndt said. “He got Catholic Charities on much stronger economic footing and he increased the engagement of the Catholic community and the entire community – Jewish, Protestant, black and white. Everyone knows Catholic Charities today in a way they didn’t before Hal Smith.”

Smith, who had considered becoming a Paulist priest as a young man and who spent five years in the seminary, likened his experience at Catholic Charities to the religious life.

“I was part of a team that saw God’s presence in every person we served,” said Smith, noting that Catholic Charities lives out its motto of “Cherishing the Divine Within.” “When you share the mission together, I just find it an incredibly satisfying experience. Whatever we accomplish, we accomplish as a group.”