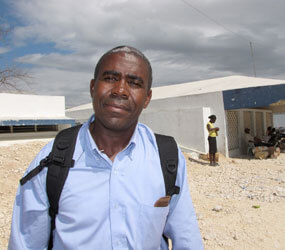 SANTO DOMINGO, Dominican Republic – Saintivo Gassant boarded a small, intercity bus with 37 other passengers – mostly fellow Haitians – at a ramshackle station in the Dominican capital, beginning a seven-hour journey back to the rubble of his native Port-au-Prince.

He carried a backpack stuffed with documents: immigration papers, a copy of his university degree, and even photos, including a snapshot of him with the president of the Dominican Republic at a tourism exhibition. He clutched the backpack tightly for much of the first leg of the journey, knowing its contents could prevent any glitches in his attempt to bring his 12-year-old daughter, Kimberley, back to the Dominican Republic.

Gassant knew few details about her situation, just that Kimberley had been living temporarily with her mother when the magnitude 7 earthquake flattened the Haitian capital Jan. 12, and that she was now living in the street, under the care of his sister.

“I still don’t know the whole story,” he said Jan. 26, explaining that he learned of Kimberley’s fate in a brief, Jan. 16 phone call. “My return home will be completely unexpected for them.”

Gassant was just one of the thousands of Haitians living in the Dominican Republic – and points farther abroad – to return to Port-au-Prince in search of information on loved ones and, in many cases, to retrieve them from the ruins of an earthquake that claimed an estimated 200,000 lives and destroyed a city that will not be fully reconstructed for years.

An estimated 1 million Haitians live in the Dominican Republic, where many Haitians go in search of better economic opportunities in industries such as tourism, agriculture and construction. Local news outlets reported long lines of people waiting for travel documents outside the Haitian Embassy in Santo Domingo. Dominican officials, meanwhile, established special mechanisms for Haitians to obtain documents to re-enter the Dominican Republic with family members.

Catholic groups that work with Haitians in the western parts of the Dominican Republic reported a similar situation.

“In the days after the earthquake there was no communication so you had many Haitians going back to get information,” said Wilma Duval Orozco, director of the Caritas aid agency for the Diocese of San Juan de Maguana.

Gassant, 44, wanted to head for Haiti immediately after learning about the earthquake, but he needed time for the Dominican authorities to issue his daughter’s entry visa. He also lacked the roughly $60 necessary for round-trip tickets and travel expenses until a friend came through with the money – an act of charity that sparked expressions of gratitude and bitterness.

“I speak four languages (Creole, French, English and German) and have an education, but don’t have a penny to my name,” said Gassant, who earned a tourism administration degree with scholarship money from a service club, sold time shares to tourists, and raised his daughter alone, while residing near Punta Cana, Dominican Republic, for most of the last decade.

Many of the fellow passengers, speaking in Creole during the first leg of the trip to the border town of Jimani, traded similar stories of angst, hardship and desperation, Gassant said.

Still, laughter was common throughout the journey – save for the few moments after an aggressive motorist clipped the bus while passing, nearly sending it into the ditch. And there were few tears or short tempers along the way, even though Gassant said one passenger spoke of losing 17 relatives in a single collapsed building. A few relatives in that same building survived, something the passenger considered “a miracle.”

Others also spoke of miracles.

Mario Romelus, 31, who attends a teaching college in Santo Domingo, was returning to Haiti to bring his elderly grandmother to the Dominican Republic.

“Houses built better than mine fell down,” he said. “I don’t know how, but thanks to God, everyone there survived.”

Gassant, to his knowledge, lost no close relatives, although the mother of his daughter apparently is now unable to look after her. Gassant’s sister and 12 others survived the collapse of her house, which Gassant considered a miracle.

But he said he needed another miracle to make the reunion with his daughter a success: Gassant lacks a job, a place of his own and the money to pay for a transcript necessary to enroll his daughter in school.

Still, he sounded optimistic and hopeful at times, saying, “I don’t have a place to stay, but I’ll at least have (Kimberley) with me.”