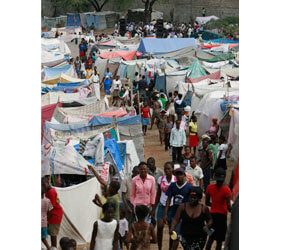 PORT-AU-PRINCE, Haiti – With words of praise to God in a melodic song that carried over the din of thousands of people, Dolce Rochelle let it be known to anyone who cared that no matter the challenge, she was doing just fine.

One of an estimated 50,000 people living in makeshift shelters of sheets, blankets and plastic tarps on what was once a golf course at the Petionville Club, Rochelle passes her days singing and selling goods for a friend out of her tent.

“I like to praise God,” she said, a smile gracing her face.

Rochelle, her husband and daughter lost everything – their home in the Delmas neighborhood, their few possessions, their way of life – Jan. 12 during a magnitude 7 earthquake.

“I’ve got hope because in what happened, my family and I didn’t die,” she said Jan. 31.

In a world where the future remains uncertain, Rochelle and many others camped out at the Petionville Club expressed a great deal of hope that God will help them survive.

The U.S. bishops’ Catholic Relief Services has worked with the United Nations and the U.S. military to turn the informal gathering of people into a formal camp. A two-week supply of food was delivered recently, and 40,000 shelter kits were scheduled to be delivered the week of Feb. 1, said Lane Harthill, CRS spokesman in Port-au-Prince.

The effort, among the largest in the agency’s history, has kept most people from going hungry. Such an enormous undertaking has not gone unnoticed by Haitians in the camp.

Because food and water supplies remain steady, camp residents are able to focus on other needs: raising income, education and recreation.

Ernsot Dormeil has been at the camp almost since people started claiming spots on the golf course – far from the danger of still-teetering structures – hours after the earthquake. which was. A civil engineer by profession, Dormeil, 29, is spending his days organizing others to begin classes for the youngsters living in the camp. He said he has five others interesting in teaching so the kids will not lose a full school year of education.

“All of the kids are losing their school and the opportunity to learn,” he told Catholic News Service Jan. 31. “I want to create that opportunity.”

Like so many others at the camp, the largest in the Haitian capital, Dormeil lived in the Delmas neighborhood, which borders the club to the north.

Children, the focus of Dormeil’s attention, engaged in games of their own creation. Some could be seen pulling small cars built from scavenged plastic bottles, bottle caps and pieces of wood or metal, all held together by short pieces of string. Girls jumped rope. Above the tents, small kites made of plastic sheeting and scrap paper or cloth poked into the breezy, humid air.

Numerous adults returned to – or started – their own businesses in the camp. From selling necessities such as fruit and preparing food to offering goods such as hair extensions and plastic jewelry, people are making the most of their plight.

Another woman recovered some of the equipment from her beauty shop and reopened her business in a tent at the intersection of two busy paths. Among other services, she offered manicures and pedicures, permanents and haircuts. She had three customers late the morning of Jan. 31.

Nearby, inside a shelter with a vinyl covering where the temperature seems almost unbearable in the mid-day sun, Elouise Marseille, another Delmas resident, ran a small cell phone-charging business. For $4 (US 50 cents), Marseille charges cell phones. On Jan. 31, seven cell phones could be seen on a table outside of his shelter. A generator nearby provided the power to two dry-cell batteries next to his bed.

He keeps a list of customers – with cell phone numbers, of course – to call them to remind them to keep their phones fully charged.

Marseille said he makes little money from the service, mostly because he charges phones for family members for free. He wondered, though, what he would do when the last half-gallon of fuel he had was gone.

But, he said, “With God, everything is possible.”