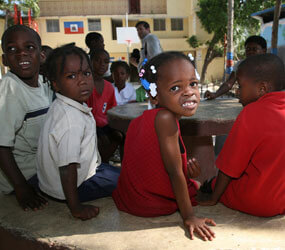 PORT-AU-PRINCE, Haiti – Colonb Mitsuka was on a playground at Louverture Cleary School when the massive magnitude 7 earthquake shook Haiti Jan. 12, causing a cinder block to fall on her, significantly injuring her face.

The 14-year old needed stitches to close the wounds around her eyes and she was under observation by doctors and her family for nine days to make sure she had no other serious injuries. One of seven students injured at the private school founded by an American deacon, Mitsuka was doing fine March 3. She was just waiting for classes to resume.

“I was afraid at first, but my mother explained to me that this was a natural disaster and it had nothing to do specifically with the school,” she said.

“All of the other students on campus help to give me courage to be here. When I am not at school I sit around and can do nothing. I want to be here to study – to be able to do something,” she said.

The students of Louverture Cleary School, just outside the Haitian capital, have their work cut out for them. But they are perfectly situated to be of service to the Haitian community in a difficult time.

“They are out translating for medical missions at the archdiocesan hospital, they are cleaning the streets, helping others demolish and rebuild houses on real foundational pads,” said Deacon Patrick Moynihan, the school’s president. “We also are running a large program for the neighborhood in which the kids act as teachers for the illiterate for youth and teenagers.”

Deacon Moynihan’s Haitian Project operates Louverture Cleary, a free boarding school for academically gifted low-income students. The youngsters also perform community service every week, working in the neighborhoods of Port-au-Prince or at places such as the Missionaries of Charity orphanage.

The Haitian Project has ties to the United States, with offices in Providence, R.I., and Rockford, Ill.

The earthquake has provided a substantial new challenge for the students to both get back to a sense of normalcy and to provide leadership even to the adults.

Student Jules Jean Anold, who lives with his father and stepmother at Routes-de-Fr,res, a Port-au-Prince suburb, volunteers as a translator at St. Francis de Sales Hospital in perhaps the most devastated part of the city. He works alongside foreign doctors treating Haitian patients.

“Haiti needs graduates, people with diplomas who will rebuild this nation,” he said. “I want to go to university after my graduation this year and be a great doctor.”

Keeping the youngsters working and engaged, sleeping in their dorms again rather than in tents or in the streets, has been a way of moving beyond the earthquake, said Deacon Moynihan, a former commodities trader who came Port-au-Prince in the 1990s for mission work.

Deacon Moynihan said having the students sleep in the dorms again gives them courage.

Structural engineers who checked the school found most structures safe and able to house classes again. But he expressed frustration with not being able to begin classes again because the Haitian government wants all schools to remain closed until they can reopen simultaneously.

“Keeping people busy is important and we have been working hard collectively to get the government to get schools to reopen,” he said. “It would give a sense of hope to the people of Haiti to open the school.”