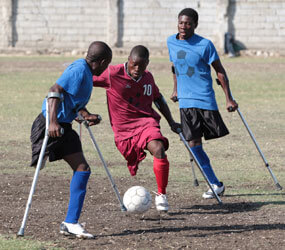 PORT-AU-PRINCE, Haiti – Even though it was just practice, Chery Sequel shot the ball, got down on his knee, pointed a finger and shouted “Scooooooooore!”

His excitement was contagious. Later, he led a chest bump with teammates who combined for another goal.

Sequel had another reason to be happy as well. He was on a soccer field playing the game he loved despite having lost his right leg an automobile accident in 1992.

The 39-year-old Sequel is among a slowly growing contingent of Haitian soccer players who have had an arm or leg amputated because of an accident or an injury during the country’s 2010 earthquake. Currently, 24 men are part of a team of amputees who joined together to prove that they can be athletes and contributing members of society.

That’s a difficult task in a country where the amputees are rarely accepted.

At practice early March 17 at a field nearly under the flight path of nearby Toussaint Louverture International Airport, about a dozen team members participated in rigorous agility drills, reviewed positioning techniques and scrimmaged. Almost all have lost a leg. Goalkeeper Francois St-Julien had part of his left arm amputated after being injured in the earthquake.

The players dribbled and passed well and hustled to chase loose balls. Most team members glided across the field with the aid of crutches, using them for support when they shot or passed the ball. The crutches were considered extensions of their arms, and any attempt to block or pass the ball with them was not allowed.

The team meets three times a week to practice. On most days not all team members are able to practice because they must report to work, said head coach Cedieu Fortilus.

Fortilus, 35, also is a technician at the Ossur International Prosthetic and Orthotics Laboratory at Bernard Mevs Hospital in Port-au-Prince. There he assembles prosthetic devices for amputees under the University of Miami’s Project Medishare. The project is also funded by the Knight of Columbus under its Healing Haiti’s Children program.

The team is nicknamed the Tarantulas – “zaryen” in Creole. The name is significant, Cedieu explained, because a tarantula is not hampered when it loses a leg and can regenerate the lost limb over time.

Fortilus and colleague Wilfrid Macena have been instrumental in building the team since it formed in August. An avid soccer player, Macena lost his right leg when a wall fell on him during the quake.

The two were concerned that many people with an amputated limb felt they would be hampered from living a normal life because of their disabilities. The two men talked with supervisors at the hospital’s prosthetic and physical therapy program and were put in touch with the Challenged Athletes Foundation, which helped with funding for uniforms and shoes.

“I am so proud that I can show some people I am amputee and I can walk again,” said Macena, whose wife is expecting the couple’s second child in July.

He has been fitted with a prostheses, but removes it to play soccer. He said he drives to work daily at the lab. The couple continues to live in a tent camp in the Dichini neighborhood of Carrefour, just west of the capital.

St-Julien said playing soccer has helped him overcome the adversities he and his family have experienced since the earthquake. He said he has been unable to find work since the disaster hit and continued to live in a tent camp not far from the field with his wife and seven children, ages 2-16.

“This is important for me and all the guys,” he said. “They (Fortilus and Macena) created this to alleviate the stress.”

Cedieu said the team has played at several venues in Port-au-Prince, including the international soccer stadium in the center of town, where some of the most severe destruction occurred during the earthquake.

The success of the men’s team led Fortilus to form a women’s team. He also has started to recruit for a children’s team.