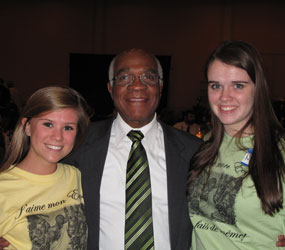 COCKEYSVILLE – Deacon Rodrigue Mortel got right to the point.

“I stand on this podium to say two words,” began the director of the missions office for the Archdiocese of Baltimore. “Thank you.”

Mortel was addressing a ballroom full of benefactors at the Marriott Hunt Valley Inn Nov. 6, when the Baltimore-Haiti Outreach Project and the Mortel Family Foundation celebrated its sixth “Gala of Hope, The Spirit of Haiti.”

Mortel had much to be grateful for, starting with the fact that as he spoke, Hurricane Tomas was veering away from Port-au-Prince, lessening the potential damage to a capital city still reeling from a January earthquake which took an estimated 300,000 lives.

The disarray in the most impoverished nation in the Western Hemisphere extends north to St. Marc, Mortel’s hometown and the epicenter of a recent cholera outbreak.

Before this trying year, St. Ann in Hagerstown, St. Agnes in Catonsville, St. John the Evangelist in Hydes and 16 other parishes in the archdiocese had already adopted sister parishes in the Diocese of Gonaives, which includes St. Marc, joining an effort that helps educate and feed more than 17,000 students.

That coordination requires influential and inspired individuals, many of whom are established or retired professionals, but the gala included the next generation of leaders of the Baltimore-Haiti Outreach Project.

Natalie Burke, Kate Lagna and Kate Somerville are students from Notre Dame Preparatory School who spent a portion of their summer vacation in St. Marc, volunteering at a camp for 60 fifth-graders at The Good Samaritans School.

At the gala, as emcee Don Scott of WJZ Ch. 13 kept things moving, they scurried around the ballroom, assisting with raffles and a silent auction, armed in the first-hand knowledge of the need in Haiti.

“It’s beyond belief,” said Burke, a parishioner of St. Louis in Clarksville. “When we landed and began the drive out of Port-au-Prince, I couldn’t tell the difference between the damage from the earthquake and the existing poverty. We did the best we could in St. Marc, but there is so much more that needs to be done.”

The Good Samaritans School, which was built to accommodate grades K-6, is now bursting with 680 students, including its first ninth-graders.

Deacon Mortel was pleased to announce that the nearby James M. Stine College (the Haitian equivalent of a high school), another of his projects, remains on schedule to open for the 2011-12 school year and accept the first graduates of The Good Samaritans School.

“We have built the best private Catholic elementary school in Haiti, for the poorest of the poor,” Deacon Mortel said. “We have done that without any assistance from the government, Haitian or U.S.

“Our goal is not to stop here,” he continued, “but to reach out from one department (Haitian state) to another, until the entire country is covered, and until the Haitian government realizes that education is the priority.”

The Baltimore Guild of the Catholic Medical Association will host a presentation by Mortel Nov. 13 at the Cathedral of Mary Our Queen in Homeland. After 10:30 a.m. Mass in Our Lady’s Chapel, Mortel will speak in the parish center on medical relief and reconstruction in Haiti.