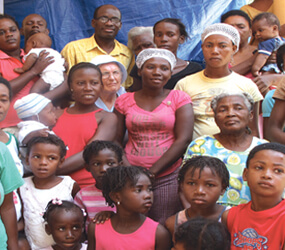 ST. MARC, Haiti – Riclaine Lescailles was hanging clothes outside her Port-au-Prince home Jan. 12, when a magnitude 7 earthquake toppled an adjoining home onto hers.

Four months later, Lescailles and her seven children reside 50 miles to the northeast, in St. Marc, where they share a large, rambling home with 16 other families displaced by the disaster that killed an estimated 230,000 and magnified the misery in the most impoverished nation in the Western Hemisphere.

The dwelling at 118 Pivert is less crowded than in March, when it was packed with as many as 160 people, women on the ground floor, men on the second.

It’s a mile north of St. Marc Cathedral, where Father Alcide Vercelat secures donations to pass on to Lescailles and other residents. Deacon Rodrigue Mortel, director of the Missions Office for the Archdiocese of Baltimore, is a major benefactor of his hometown cathedral, and, by extension, earthquake refugees like Lescailles.

Deacon Mortel translated her Creole for The Catholic Review April 8, as Lescailles held the youngest of her brood, Jean Samuel Fleury.

“She was in the front of the house, hanging clothes, some of the children were at school,” Deacon Mortel said. “They had a small house, a taller house collapsed on it. She spent seven days in the street, with her kids. She left and found a center where people were going to St. Marc.

“They were first housed in a school (in St. Marc), until it reopened. She’ll have to move again.”

As Jean Samuel spit up on her pink frock, Lescailles was asked about hope.

“She said that she’s lost everything,” Deacon Mortel translated, “but God will provide. She doesn’t know what she’s going to do, but her husband (Jean Smith) has a job and some of her children are in school.”

Of the hundreds of thousands displaced by the earthquake, one in three found their way to St. Marc and other towns in the state of Artibonite, in the Diocese of Gonaives, the focus of Baltimore’s Missions Office.

Discouraged by communal living arrangements and a lack of work, however, many have returned to Port-au-Prince, where they can scavenge and perhaps find a single-family unit in one of the tent cities built by assorted international relief agencies.

As residents of 118 Pivert cooked over an open fire in the courtyard or cleaned, Father Vercelat opened his wallet and distributed 25 Gourdes, about 50 cents in the United States, to adults. It was their family per diem.

Into May, Father Vercelat was looking for solutions.

“What I hope to do,” he wrote in an e-mail translated from his French, “is to give a little money to each family so that they can get organized and find some economic fulfillment. Because right now, fewer and fewer people think about Haiti.”

Next: A religious order of teachers regroups in Port-au-Prince.

How to help: On the Web, visit the Missions Office at archbalt.org, or Catholic Relief Services, at crs.org.