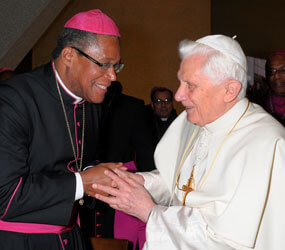 ROME – The tragic destruction of Port-au-Prince and surrounding areas is an opportunity for Haiti and the world to rebuild a nation free from poverty and prejudice and based on justice and compassion, said the president of Caritas Haiti.

Bishop Pierre Andre Dumas of Anse-a-Veau et Miragoane also appealed to the international community to make aid be “more humane” in a way that respects human dignity and is free from self-interest, speculation, and politics.

The bishop spoke in Rome Feb. 3 at an event organized by the Sant’Egidio Community, which supports peace and development projects around the world, including in Haiti.

“If one world has crumbled, there is a new world to be built” that is based on compassion and solidarity, he said.

“The best needs to come out of this and not a return to how things were before,” he said. He said reconstruction cannot follow the old ways of doing things in which the country is abandoned, people live in slums, and “we pretend that they are not our concern.”

With the earthquake leveling almost 90 percent of housing in Port-au-Prince, Bishop Dumas said, “nature has allowed all of us to find ourselves in the same situation,” with blacks, whites, and mulattos, rich and poor all living on the street or in tents.

“Therefore, why don’t we all start from this with a new vision, a fresh start, and a new way of seeing things and of living together,” he asked.

Right now the Haitian people need charity that is “intelligent, efficient, rapid, and consistent,” he said.

Foreign assistance also needs to help Haitians be the leaders and builders who put their own nation back on its feet, he said.

“Help doesn’t mean to take the place of Haitians” and try to solve all the problems unilaterally, Bishop Dumas said. Outside assistance needs to be guided by dialogue with credible local organizations, people on the ground, and the church, he said.

He said Haitians need cash-for-work projects, which give local people desperately needed funds to slowly rebuild lost savings and become self-sufficient instead of being dependent on slowly or insufficiently delivered aid.

Also, “cash-for-work encourages people to give the best of themselves,” making them feel self-confident and good about their country, he said.

“We don’t want the militarization or bureaucratization of aid,” he said alluding to the military presence of the United States.

He said because of its geographic proximity, the United States could do much more by making aid more effective and getting it out to more people. However, Bishop Dumas asked that the United States avoid “an excessive militarization of aid – the humane, humanitarian side is needed.”

“The subject is Haiti and it’s not a good thing when Haiti becomes the object” of someone else’s agenda, he said.

“I’m launching an appeal that the human being be at the center” of people’s attention and that human dignity be respected, especially that of children, he said.

The idea that people would take advantage of the tragedy in Haiti with illicit adoptions and human trafficking would be “madness,” he said. And he urged people to support families in Haiti so that children who have lost one or both parents can still live with close relatives and family members.