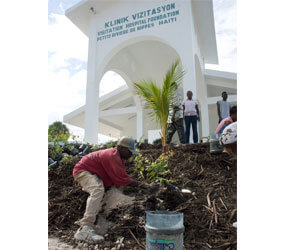 NASHVILLE, Tenn. – A Haiti clinic built and operated by a Nashville-based nonprofit foundation sustained some cracks in the Jan. 12 earthquake and the aftershocks that followed, but it has remained open and the staff continues to treat patients.

Visitation Clinic in Petite Riviere de Nippes is one of the few undamaged medical facilities still operating in the country, said Dr. Tom Grabenstein, past chairman of the board of directors of Visitation Hospital Foundation.

A member of Immaculate Conception Parish in Clarksville, Grabenstein has made dozens of trips to Haiti over the years, mostly as part of medical missions with fellow parishioners.

The clinic was opened more than two years ago. Visitation Hospital Foundation is a nonprofit organization that grew out of the Parish Twinning Program, which links U.S. and Canadian parishes and Christian congregations with Haitian parishes and programs to offer assistance.

Theresa Patterson, executive director of the foundation and the twinning program, said that despite the relatively minor damage to the clinic and no injuries, the employees were “very disturbed emotionally. Most of them have families back in Port-au-Prince.”

The clinic and Petite Riviere are about 50 miles from the epicenter of the earthquake and a four-hour drive over Haiti’s rough roads from the nation’s capital of Port-au-Prince, which sustained massive damage. Because of the distance, the clinic has not seen an influx of earthquake victims seeking treatment at the clinic.

Clinic officials have been in contact with U.S. military officials about bringing some of the injured from Port-au-Prince to their facility for treatment.

From her home base in Nashville, Patterson has been working to coordinate the logistics between the Navy’s hospital ship, the USNS Comfort, anchored off Port-au-Prince since shortly after the earthquake and Visitation Clinic, but no final plan has been hammered out yet. The ship was scheduled to leave sometime after the first week of March.

“We want to accept patients we can care for in the clinic itself” without setting up large military tents to treat upward of 100 people, Patterson told the Tennessee Register, Nashville’s diocesan newspaper. The clinic, which does not ordinarily accept overnight patients, could accommodate about 10 longer-term patients recovering from surgery and still handle the usual daily flow of about 90 patients.

For now, and in near future, the clinic staff expects to be treating infected wounds and neglected fractures, Grabenstein said.

Alan Dooley, a foundation board member and the architect who designed the clinic, said the building was designed more to withstand hurricanes rather than earthquakes.

Dooley credited the contractor, Abdou Fall of Haiti, with building the clinic so that it withstood the earthquake. “The structure was Abdou’s baby,” said Dooley, a parishioner at Christ the King Church in Nashville. “He made it strong.”

The foundation would like to build two operating rooms at the clinic, but has not had the money to do so, Grabenstein said. But people’s donations in response to the tragedy in Haiti may now make that possible, he added.

“With the influx of money, we hope to be able to construct them soon,” Grabenstein said. Since the earthquake there has been a “tremendous outpouring of support” to the twinning program and the Visitation Hospital Foundation, he said.