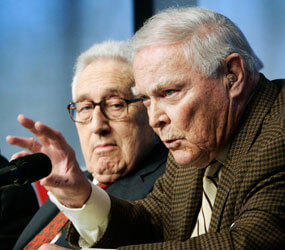 Alexander M. Haig Jr., former U.S. secretary of state and retired four-star general who served as a top adviser to three presidents, died Feb. 20 of complications from an infection. He was 85.

Haig, who was Catholic, died at Johns Hopkins Hospital, where he was surrounded by family members.

Although funeral and burial arrangements had not been announced, Haig’s brother, Jesuit Father Francis Haig, a retired physics professor at Loyola University Maryland in Baltimore, told The New York Times that the Army was coordinating a Mass at Fort Myer military base in Arlington, Va., and interment at Arlington National Cemetery.

The priest, a former president of LeMoyne College in Syracuse, N.Y., and Wheeling Jesuit University in West Virginia, said the services for his brother would likely be delayed for about two weeks.

Alexander Haig, a veteran of the Korean and Vietnam wars, served as secretary of state under President Ronald Reagan and White House chief of staff under Presidents Richard Nixon and Gerald Ford. He made a run for president in 1988 but failed to win the Republican nomination.

For years Haig was remembered for his televised response to the 1981 assassination attempt on Reagan: “As of now, I am in control here in the White House, pending the return of the vice president.” Then-Vice President George H.W. Bush was out of the country, but next in the line of succession to the presidency is the Speaker of the House, then the oldest U.S. senator of the party in power and then secretary of state.

After two years at the University of Notre Dame, Haig won an appointment to the U.S. Military Academy in West Point, N.Y. He graduated in 1947 and in 1949, he became administrative assistant to Gen. Douglas MacArthur’s deputy chief of staff in occupied Japan.

During the early months of the Korean War, Haig saw action in five campaigns and participated in the Battle of Inchon, an amphibious invasion. He returned to the United States in 1951, held various posts and received a master’s degree in international relations from Georgetown University in 1961.

In 1962, Haig was assigned to the Pentagon and two years later became assistant to Defense Secretary Robert McNamara. In 1966 he was assigned to Vietnam, where he served as commander of the 1st Battalion of the 26th Infantry and won the Distinguished Service Cross, the U.S. Army’s second highest medal for valor, for his actions while leading troops in Battle of Ap Gu in 1967. Among other honors he received the Purple Heart and was promoted to colonel.

In 1969 was appointed a military adviser to the National Security Council. In 1973, Nixon named Haig vice chief of staff of the Army and promoted him to four-star general. Later that year Haig was named Nixon’s chief of staff, a role he continued during the last days of the Nixon presidency. Haig was credited with convincing Nixon to resign in the wake of the Watergate scandal.

Haig served as NATO commander from 1974-79 and was appointed secretary of state by Reagan in 1981, which made him the second Catholic to serve as secretary of state. Edmund Muskie, who held the post in the final eight months of President Jimmy Carter’s administration, was the first.

As secretary of state, Haig referred to himself the “vicar” of foreign policy. During his 18-month tenure, his foreign policy pronouncements often brought him into conflict with the Catholic Church.

Haig was criticized by some Catholic groups for speculating that the four Catholic churchwomen who were murdered in El Salvador in 1980 may have been running a roadblock shortly before their deaths. Some complained the four women were being subjected by Haig and other administration officials to a campaign of “innuendo” that they favored leftists.

He clarified his comments a day later, saying the roadblock scenario was only one theory and remarked that the women might have been shot by arms-bearing forces.

That same year, the president of the Conference of Major Superiors of Men, Franciscan Father Alan McCoy, said he was alarmed by Haig’s comments at a congressional hearing in which he said that the United States would do “whatever is necessary” to prevent guerillas from overthrowing the government in El Salvador.

In 1981, Haig met privately with Pope John Paul II for 45 minutes at the Vatican. Neither the Vatican nor the U.S. Embassy in Rome announced any details of the meeting, although a U.S. official said the Middle East and the situation in Central and South America were among the topics they discussed.

In 2007, the new headquarters of the U.S. Archdiocese for the Military Services in Washington, named its dining room after Haig and his wife and grandson attended the dedication ceremony.

Father Haig once said about his brother that he had “very clear ideas of himself in service to the republic and as a Catholic layman.”

In a Feb. 20 statement President Barack Obama praised Haig as “a great American” who was an example of “our finest warrior-diplomat tradition.”

Besides his brother, Haig is survived by his wife of 60 years, Patricia; the couple’s three children, Alexander and Barbara of Washington and Brian of Hopewell, N.J.; and eight grandchildren.