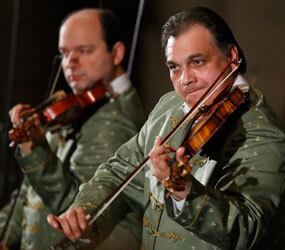 VATICAN CITY – Undoubtedly the most discriminated minority group in Europe, the Gypsies experience the impact of firmly rooted stereotypes every day, said a Vatican official.

“The situation of the Gypsy peoples in Europe is strongly marked by marginalization and discrimination, even in their exercise of fundamental human rights like the ones to education, work, housing and health care,” said Archbishop Agostino Marchetto, secretary of the Pontifical Council for the Pastoral Care of Migrants and Travelers.

The archbishop spoke at the opening of a March 2-3 meeting of the national directors of pastoral programs for Gypsies in Europe. The meeting not only looked at improving religious services for the Gypsy communities, but also at ways to promote their inclusion in wider society and combat prejudice against them.

To give a wider public a positive experience of Gypsy culture, the Vatican invited the Rajko Orchestra, a Hungarian Gypsy ensemble, to perform in Rome’s Basilica of Santa Maria in Trastevere March 2. And the Vatican invited Hungary’s national Gypsy soccer team to play a friendly match against the Swiss Guard’s team March 3.

Archbishop Marchetto told the national directors’ meeting that in a recent poll of Gypsies, half of those questioned said they had “undergone discrimination at least once in the year before the inquiry,” and of those who reported suffering discrimination, “each one was the victim on the average of 11 such episodes of penalization in 12 months.”

Moreover, he said, 69 percent of those questioned felt that “discrimination due to ethnic belonging is very widespread in their countries,” often resulting in xenophobic, racist and anti-Gypsy violence.

The term Gypsy is used to refer to about 36 million people around the world who make up the various communities that call themselves Roma, Sinti, Manouche, Kale, Gitan and Yeniche.

Archbishop Antonio Veglio, president of the pontifical council, told the pastoral workers that many national and international organizations have taken up the cause of Europe’s Gypsies, vowing to protect their rights and ensuring they have opportunities for education and professional training. But, he said, much remains to be done, including in the church.

Many Gypsies “are forced to live in conditions of poverty. Others encounter difficulty in reaching the heart of the church due to prejudices and stereotypes, sometimes so firmly rooted in society as to preclude the development and maturation of attitudes of openness, acceptance, solidarity and respect,” Archbishop Veglio said.

While Gypsies need a real welcome and a helping hand, they also must take responsibility for preserving their cultures while contributing to European society, he said.

The meeting also focused on the European Union’s initiative to proclaim 2010 the “European Year of Combating Poverty and Social Exclusion” with the aim of reintegrating disenfranchised people, Archbishop Marchetto said.

Many organizations see the initiative as a “great opportunity for the Gypsy peoples” because it will provide actions in all the areas that are important for their social inclusion, including education, employment, housing and health, the archbishop said.