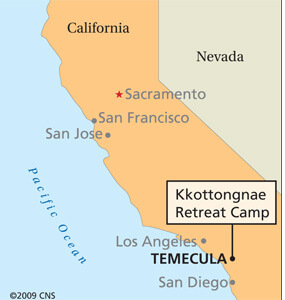 TEMECULA, Calif. – One woman was killed and three people were injured April 7 after a 69-year-old man opened fire at a remote Catholic Korean retreat center in Southern California.

The Associated Press identified the gunman as 69-year-old John Chong, a volunteer who lives at the Kkottongnae Retreat Camp, about 85 miles southeast of Los Angeles. No motives have been determined for the attacks.

Mr. Chong was eventually disarmed and tackled by those he was attacking. He was hospitalized April 7 in an unconscious state.

The retreat center is in Temecula on the grounds of a former summer camp in the San Bernardino Diocese. It has eight to 10 cabins for visitors and semipermanent residents, some of whom had been homeless. The center is one of four U.S. branches of the Kkottongnae Brothers and Sisters of Jesus, a Catholic group founded in South Korea to serve the poor and homeless.

Kkottongnae is a Korean word for “flower village.”

Bishop Gerald R. Barnes of San Bernardino said in an April 8 statement that he was “deeply saddened” by the shooting and asked for prayers for the “victims of this tragic act and for the sisters who run the retreat camp.”

“In these troubling times when we are seeing so many acts of senseless violence, we must hold God’s peace and grace in our hearts and ask for his strength to bear these tragedies,” he said.

Since the victims speak only Korean, the police had a difficult time initially piecing together what took place.

Sgt. Michael Lujan of the Riverside County Sheriff’s Department told reporters April 8 that the gunman attacked a couple in a cabin, killing a woman with a single shot and wounding a man in the chest.

He then tried to kill a man and a woman in another cabin, firing two shots in the air before they managed to disarm him after a fistfight that injured all three. The injured, all older than 50, were hospitalized and were not in critical condition.

None of the victims were identified.

Police evacuated the area and blocked off access. A statement from the San Bernardino Diocese said the camp will be closed for the rest of April.

“This is the last place this is supposed to happen,” Dennis Gutierrez, spokesman for the Riverside County Sheriff’s Department, told reporters. “A lot of people are shaken up.”