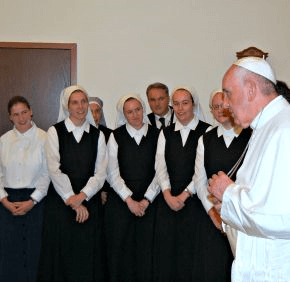 By Erik Zygmont
ezygmont@CatholicReview.org
Angela Conti, who will join the Little Sisters of the Poor as a postulant Oct. 25, struggled to find the words to describe meeting Pope Francis Sept. 23, but she did her best.
“When he was finally in the room with us, I felt like time stopped for a minute,” said the Glen Burnie native, remembering the pope’s visit to the Little Sisters’ Jeanne Jugan Residence in Washington, immediately after he celebrated the canonization Mass for St. Junípero Serra at the Basilica of the National Shrine of the Immaculate Conception.
Despite her awe, “it didn’t feel like the pope was in the room with us,” Conti said, likening the earthly head of the Catholic Church to “a humble pastor” who was “just so approachable” and filled with “so much joy for the church.”
The pope took time to speak with the sisters individually.
“We were all standing in a big circle,” Conti said. “He came around, taking our hands, and talking about whatever we wanted to talk about.”
“I didn’t have any words,” Conti said. “We exchanged smiles.”
To the group as a whole, Pope Francis affirmed the importance of caring for the elderly poor, the Little Sisters’ mission.
“He talked about how serving the elderly is not always easy, that it’s not an attractive life style,” Conti said, “but it’s very important because that population is so marginalized.”
“And he told us that in caring for them, we were caring for Jesus,” she added.
Many, including Vatican spokesman Father Federico Lombardi, have described the pope’s visit as a show of support for the Little Sisters, who are currently in a legal battle over the Obamacare mandate that employees receive contraception with their insurance coverage.
Earlier that day, Pope Francis had voiced support for the U.S. bishops’ defense of religious freedom in his debut speech to Americans and President Obama on the South Lawn of the White House, Catholic News Service reported.

For more coverage of the papal visit, click here.