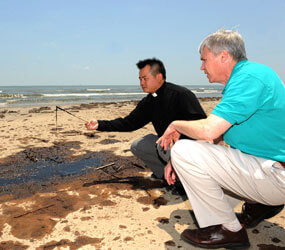 SCHRIEVER, La. – Fishing, swimming and interacting at all with the water off the coast of Louisiana is off-limits to residents, and their livelihoods and quality of life are suffering, said the pastor of Our Lady of the Isle Parish in Grand Isle.

“They can’t fish; they can’t swim; they can’t interact with the water; they can’t live off the food from the water,” Father Mike Tran told the Bayou Catholic, newspaper of the Diocese of Houma-Thibodaux. “This oil spill has had a traumatic impact on the people of the island.”

Grand Isle is a barrier island at the mouth of Barataria Bay where it meets the Gulf. The island is connected to the mainland of Louisiana by a causeway.

“There are no more tourists; basically everything is shut down. We can’t even enjoy the fresh air when we go outdoors because of the smell of the oil that is continually washing up on the beach,” the priest said. “And now, with the beginning of hurricane season, the stress levels of the residents have risen even more.”

Father Tran also reported that the number of people attending Mass at the Grand Isle church has decreased on weekends and collections are down by approximately $1,000 a week so far. He said he is worried about the future of the parish.

Grand Isle residents and their counterparts across the Houma-Thibodaux Diocese and the rest of the Gulf Coast were waiting anxiously for word that BP has been able to contain the oil flowing into the Gulf of Mexico from the company’s blown-out drilling rig called Deepwater Horizon.

Since the April 20 explosion and fire that killed 11 workers on the rig, millions of gallons of oil have been pouring into the Gulf each day; and containment efforts by BP to date have been only partially successful.

There is much uncertainty about the long-term impact of the man-made environmental disaster, which is being called this country’s worst, on the people of south Louisiana who live and make their living on the water.

Father Thomas Kuriakose, pastor of St. Charles Borromeo Parish in Point-aux-Chenes, said a lot of his parishioners are fishermen and although their future livelihood is being threatened, currently many of them were working for BP to help in some way with the cleanup of the spill.

“At this time, most of the people here don’t need much financial assistance, but I have spoken to a lot of people who are depressed about the uncertainty of what the future holds for them and for the seafood industry in this area,” said Father Kuriakose.

He said he has noticed an increase in the number of people coming to Mass at his church since the accident and that for now parish collections remain steady.

“This is a terrible tragedy that is not only affecting the people along the coast of Louisiana, and several other states, but also the land and wildlife, as well,” said the priest.

He said he has had two meetings with Michel Claudet, president of Terrebonne Parish, a civil entity, and other church members to discuss the tragedy and how it is affecting local residents.

Counseling, prayer services and pastor visits are some of the ways St. Charles Borromeo Parish is helping the victims of the spill.

At Our Lady of the Isle, parish staff has been busy trying to identify those families truly in need and to offer any assistance they can.

Prayer services were being held once a week for all islanders to give them a chance to pray, socialize and express any fears or concerns they may have. Father Tran also is making himself available to anyone who needs to talk about the situation.

Kathryn Anderson, associate director for parish social ministry at Catholic Charities of the Diocese of Houma-Thibodaux, said the agency has made case workers available to residents.

She also noted that from the beginning, Matthew 25 disaster response teams have been present in their communities.

“Matthew 25 volunteers are used to getting their hands dirty right after a disaster. When we have a hurricane they respond quickly by serving meals or helping with the cleanup,” she told the Bayou Catholic. “They haven’t had that opportunity in this situation because the cleanup work is being performed by contract labor or wildlife specialists.

“However, that may change as we continue with the recovery efforts,” said Anderson.

“Most of the people who come to us are visibly upset, but by the time they leave, they feel better,” said Maryal Mewherter, a case worker at the Grand Isle Community Center. “Sometimes I get a hug just for giving them one $100 food voucher.”