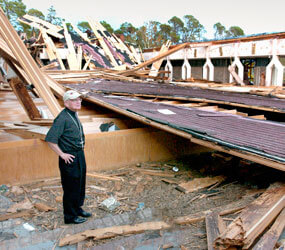 WASHINGTON – Five years after the devastating effects of Hurricanes Rita and Katrina, rebuilding efforts are still very much a work in progress. Many, but not all, Gulf Coast residents have returned and although many homes and buildings have been rebuilt, more still needs to be done.

Amid the ongoing recovery, many exasperated locals say they just want to move on, especially as the nation remembers the five-year anniversaries of Hurricane Katrina, which slammed into the Gulf Coast Aug. 29, and Hurricane Rita, which made landfall in Texas and Louisiana Sept. 24.

Moving past the collective grief and frustration of Katrina is the impetus behind a scheduled ecumenical service at Our Lady of Prompt Succor Parish in Chalmette, La., Aug. 28 dubbed “a funeral for Katrina.” The church is located in the largest city in St. Bernard’s Parish, a civil entity just east of New Orleans that was almost entirely flooded from the breached levees and has yet to completely recover. According to U.S. Census Bureau reports, the region is only half as populated as it was before the storm.

New Orleans Archbishop Gregory M. Aymond and other religious and community leaders were to direct the service where participants will be invited to write their feelings on strips of paper and toss them into a casket. After the service, the casket will be loaded into a horse-drawn vehicle and a high school jazz band will lead the funeral procession to the local cemetery to place the coffin in a newly built Katrina memorial vault.

A parish bulletin announcement of the event said: “It is time to move on with our lives and put Katrina to final rest. Many of us have already moved on, and the community is experiencing renewal and much growth.”

A big part of moving on depends on the help people received and continue to get after the largest natural disaster in U.S. history. Catholic Charities USA outlined the broad extent of its outreach in a new report “Katrina & Rita: Five Years Later.”

The report notes that the national organization raised $163 million for hurricane relief. Of these funds, $116 million went to Louisiana, $23 million to Mississippi and $13 million to Texas. Five other jurisdictions – Florida, District of Columbia, Georgia, Missouri and Tennessee – received more than $1 million for their assistance to evacuees.

In the five years since Katrina, Catholic Charities New Orleans alone distributed $55 million in direct financial assistance to those in need, provided 335,000 nights of shelter, gutted and rebuilt 3,200 homes, distributed 250 million pounds of food and provided counseling for 900,000 people.

Since Katrina, the organization has increased its efforts on preparing for future disasters.

“Now we’ve got a plan for whatever comes our way,” said Carol Spruell, communications coordinator for Catholic Charities in the Diocese of Baton Rouge.

Craig Fugate, administrator of the Federal Emergency Management Agency, has told reporters that his office is similarly better prepared for a major disaster after being severely criticized five years ago for a perceived slow response.

In the days before Katrina’s fifth anniversary, U.S. government officials announced more than $25 million in aid for newly approved Gulf Coast rebuilding projects, which includes $11 million to the state of Louisiana to help rebuild the student center at Xavier University in New Orleans – the country’s only historically black Catholic university.

Xavier University was virtually underwater after Katrina. When floodwaters subsided, they left behind layers of mildew and mold along with damaged books, furniture, carpeting and a buckled hardwood gym floor. The storm also destroyed buildings and ripped off roofs.

Since then, the university has focused on getting back on track. This fall semester it opens a new wing at its College of Pharmacy and starts construction on a chapel in honor of the university’s founder, St. Katharine Drexel. It is also starting work on a new student center and other campus building renovations.

President Barack Obama was scheduled to speak at the school Aug. 29. Members of his Cabinet and other administration officials were making several stops in New Orleans and at least one stop in Mississippi to mark the storm’s anniversary and emphasize recovery and restoration efforts.

Sarah Comiskey McDonald, director of communications for the Archdiocese of New Orleans, told Catholic News Service that FEMA had given the archdiocese about $61.9 million by the end of 2009 for rebuilding, repairs and alternate projects. The archdiocese anticipates receiving another $108.1 million for ongoing repairs and upgrades.

Although Mississippi has received less attention than New Orleans, the state’s coast was devastated when the hurricane hit and some areas are still struggling to recover. In the Diocese of Biloxi, schools and churches damaged from wind and severe flooding are slowly being repaired.In some cases destroyed or damaged schools have merged and some churches will not be rebuilt.

When Katrina hit Mississippi, the sign outside Our Lady of the Gulf Church in Bay St. Louis read: “Sometimes, you have to lose everything in order to do anything.”

The irony of the message is not lost on the pastor, Father Michael Tracey. In the Aug. 20 edition of the Gulf Pine Catholic, diocesan newspaper of Biloxi, the priest said the electronic parish sign will reflect the same message this Aug. 29.

“This time,” he said, “rather than being providential or prophetic, it may be a sign of realistic hope, lessons learned and providential care.”