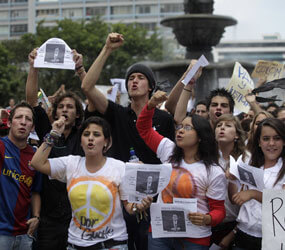 Cardinal Quezada, archbishop of Guatemala City, urged the avoidance of “an irrational conflict of classes” May 17 as the country sorted through allegations that the president and three others in his inner circle were responsible for murder and corruption.

The dueling demonstrations came one week after a lawyer, Rodrigo Rosenberg, was killed. Rosenberg left behind a video in which he accused Colom of orchestrating the murder as well as the killings of two business leaders who were shot in April.

“If you’re watching this message, it is because I was assassinated by President Alvaro Colom with help from (presidential secretary) Gustavo Alejos,” the video said.

In the 18-minute video, which was posted on YouTube and spread across the Internet in mid-May, Rosenberg alleged that Colom, the first lady and two associates were involved in a multimillion-dollar money-laundering scheme that diverted public funds into dummy corporations.

Colom and the others have repeatedly denied any involvement in the scheme or the murders.

Although Cardinal Quezada called for Guatemalans to withhold judgment on the case while the investigation is carried out, he said in his remarks, “I would like to have been at the demonstrations to advocate for peace from the Guatemalan society.”

On May 19, a group of demonstrators presented a petition with more than 30,000 signatures against Colom to Guatemala’s Congress. His political opponents have said he should step aside to assure the independence of the investigation, which is being handled by the government’s equivalent of the U.S. Department of Justice.

Colom has refused calls for his temporary resignation.

“I was elected and there is no proof, other than a recording that I completely discredit,” Colom said in an interview with CNN en Espanol.

Colom has said the accusations are part of a right-wing political conspiracy designed to bring down his administration. Rosenberg, he said, was coerced into making the video, a charge Rosenberg’s family members have denied.

Rosenberg was shot dead in a wealthy city neighborhood May 10 while riding is bicycle for exercise. The video in which he asserts Colom was behind his murder was distributed a day later, during his funeral.

The video “created the greatest political crisis for this democracy, because never before has a democratically elected president been accused of murder,” said the influential newspaper Prensa Libre. Since its 36-year civil war, the country has struggled with violent street crime and a growing drug-trafficking problem.

Nery Rodenas, director of the Archbishop’s Human Rights Office in Guatemala City, told Catholic News Service that, because of the nation’s fragility, an independent, exhaustive investigation is critical.

“We’re very worried but it is very difficult to pass judgment on these allegations because there are elements in Guatemala that complicate the situation,” Rodenas said. “We need to support the government and the democracy, so we have to wait and allow the investigation to go forward.”

A U.N.-backed investigative agency, formed in 2006 to confront organized crime in Guatemala, is participating in the investigation. U.S. Ambassador Stephen McFarland said the regional FBI agent for Central America arrived in Guatemala last week to assist in the probe.