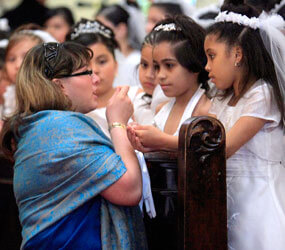 NEW YORK – The rapid growth and cultural diversity of Latino Catholics makes tremendous demands on the Catholic Church at the same time it enriches and revitalizes the church community, according to speakers at a forum on “Becoming Latino: The Transformation of U.S. Catholicism.”

Latinos, like Catholics throughout the church, vary greatly and require a variety of pastoral responses. The U.S. bishops support integration as a way to receive people of different cultures into the church, rather than assimilation, which is dehumanizing and racist, the speakers said.

The Dec. 9 forum was sponsored by the Center on Religion and Culture at Jesuit-run Fordham University in New York.

“Latinos are two decades away from constituting (as much as) 50 percent of the Catholic population,” said Peter Steinfels, the center’s co-director. “Latino Catholics will not just have a place at the table, they are likely to be the hosts at the table.”

He said the focus in the past was on whether Latino Catholics were being recognized and welcomed as a new minority or whether they were turning instead to other Christian groups.

Now, Latino Catholics are determining how best to mobilize their own intellectual and pastoral resources to win a voice and a place at the table, he said.

Jesuit Father Allan Figueroa Deck, executive director of the U.S. bishops’ Secretariat of Cultural Diversity in the Church, concurred with late Cardinal Avery Dulles, who said the coming of immigrants, particularly Hispanics, to the U.S. Catholic Church at this time offers unprecedented opportunities for the church to influence U.S. culture.

The growth of the Latino population, through both immigration and births, is the primary reason the percentage of Catholics in the United States has remained consistent, at 23 percent to 24 percent, according to Luis Lugo, director of the Pew Forum on Religion and Public Life.

“The U.S. is not becoming less Catholic because the Roman Catholic Church is becoming more Hispanic,” he said.

Lugo said the three main factors that determine a religious group’s share of the population are immigration, fertility rates and the degree to which members change religious affiliation.

In general, the Catholic Church is a “leading demographic indicator,” said Lugo. “If you want to see where the country as a whole will be in 40 years, look at the Roman Catholic Church today.” He added that almost 50 percent of Catholics under age 40 are Latino.

“Ours is truly an immigrant church,” Lugo said. “If there’s a group that knows how to integrate immigrants through long practice, it’s the Roman Catholic Church.”

Jesuit Father Claudio Burgaleta, coordinator of the Latin studies program at Fordham’s Graduate School of Religion and Religious Education, said Latinos “are at the same time traditional and orthodox and also charismatic. These are characteristics that often don’t go together in the popular imagination.”

He said the apparent contradictions can be understood by remembering that Catholic imagination “is sacramental and can hold in tension dimensions that don’t cohere.”

Father Burgaleta said the diversity of the Latino Catholic population, which includes many different national cultures, “is a tremendous headache for priests, religious and lay workers. It makes tremendous demands on pastoral services at the same time that it enriches the community with many different traditions of Catholicism.”

He described the encuentro programs organized by the Catholic bishops in the 1980s to develop a pastoral plan for Hispanics. “The received paradigm is no longer valid,” he said, because it does not recognize the current diversity of Latino Catholics.

Maria Odom, executive director of the Catholic Legal Immigration Network, described the social challenges faced by undocumented immigrants and those in the process of being deported. She said there is a need for mainstream Catholics to know and understand their immigrant brothers and sisters.

“There is an urgent need for the deep understanding of why those individuals are crossing our borders, why they’re willing to abandon their homeland, their culture, their families, often traveling a treacherous road, losing life and limb, more often than not arriving with nothing in their pockets,” she said.

Monsignor Arturo Banuelas, pastor of St. Pius X Parish in El Paso, Texas, said comparisons of Latinos to groups who emigrated from other continents are misleading.

“Unlike other ethnic groups who lost many of their cultural traditions and language, we have not lost touch with our roots,” he said, as evidenced by the “dominant use of Spanish in our homes.”

Referring to the purchase of the American Southwest from Mexico in 1848, Monsignor Banuelas said, “We did not cross an ocean, the border crossed us. … While many still tag us as a minority in the U.S., Latinos feel linked with the rest of the Spanish-speaking people of the Americas.”

Father Banuelas said, “Pastoral practice has to go beyond assimilationist attempts to integrate Latinos into mainstream USA or efforts to stop the wave of Catholics from becoming Protestant..”

He said church leaders needed to accept Latino popular religion as an authentic expression of Catholicism.

He also said Latinos want Catholic Church leaders to speak Spanish and address issues such as the needs of the rising Latino middle class; the departure of Latino youths from the church; Pentecostalism among Latinos; and the need for comprehensive church leadership formation and training programs.