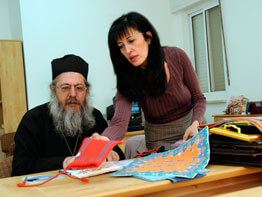 JERUSALEM – Butros Abu Shanab said he may be like the tragic literary hero Don Quixote as he tries to stop the continuing tide of Christian emigration.

Mr. Abu Shanab, a 54-year-old architect who quit his job to spearhead the nonprofit Holylanders Association for the Preservation of Christian Heritage, let out a wry laugh: Though he is intent on stopping the younger generation of Christians from emigrating, three of his own four children live abroad.

“I have one daughter studying in Berlin, a son studying in Australia, a married daughter and two grandchildren living in Dubai (United Arab Emirates) and only one daughter is still living with us,” said Mr. Abu Shanab, a Greek Orthodox. “This is very typical of Palestinian Christian families.”

Two years ago Mr. Abu Shanab left his job and began rallying all his energies and a large part of his finances into an ecumenical effort to curb Christian emigration and strengthen the community’s identity and traditions regardless of denomination. His association just recently started its work.

“We have to find a place where Christians can be gathered,” he said, noting the precarious position Christians have in Jerusalem because of the high cost of living in the city.

“It is very difficult for Jerusalem Christians to continue their existence,” he said. “We hope to develop a bigger umbrella organization where we can overlook theological differences and look at the common thread.”

The Holylanders, a group of about 20 people, have chosen Taybeh, West Bank, as the place for the Christians’ last stand. Located between Jerusalem and Ramallah, West Bank, it is the only all-Christian village in the Palestinian territories. The residents of Taybeh have kept their lands in Christian hands by never selling to people from outside the village.

Taybeh is also Ephraim, the biblical city of refuge where Jesus fled before coming to Jerusalem and where he was captured by the Romans.

Mr. Abu Shanab said he was disappointed in Christian church leaders, whom he said issue statements and talk but in the end do very little in terms of real action.

Robert Handal, 53, who works with Mr. Abu Shanab, said many of the local churches are often so busy keeping an eye out for their own interests and are so busy with their own internal issues that they forget about the Christian community.

The Catholic Church is doing better than other churches in helping the Christian community, Mr. Handal said.

“I am Catholic but I don’t want to say I am only Catholic. We are all Christian and we have to help each other. We are fighting for our existence here,” he said.

For now all three of his children have remained in the Holy Land, he noted, adding that they also yearn for a greater ecumenical spirit among the Christian denominations.

One of the Holylanders’ first projects has been to purchase a plot of land for an ecumenical Christian cemetery near Bethlehem. Now the group awaits permits to allow them to use the land.

Although every denomination has its own cemetery, many of the plots have been bought up by non-Palestinian Christians, said Mr. Abu Shanab.

The Holylanders also want to begin an ecumenical theology seminary where laypeople can study religion and religious tour guiding. The association also hopes to establish a Christian radio station and already has a transmitting permit. So far it has been able to rent a plot of land several miles from the center of Taybeh, but has yet to find funding for the infrastructure and building. It also envisions building an ornamental peace altar in a central location in the village.

While the plans are grand, the reality is harsh.

“This is a very ambitious plan but not realistic. We already have Bethlehem University with all the strength of the Catholic Church and they are facing deficits,” said Father Raed Abusahlia of Holy Redeemer Parish in Taybeh. “Who will be the students? Who will pay the running costs? What about the infrastructure?”

Father Abusahlia said he and Mr. Abu Shanab “share some ideas practically speaking, but I will not accept any kind of partnership. He is a dreamer and I am pragmatic and there is a difference in views. “Butros Shanab is a good guy and I wish them well, but I will not be involved in any of his projects. We support him but know he will fail,” he said.

Mr. accepted the label of dreamer.

“We are dreamers, but it is nice to be a dreamer. Father Raed is working hard to get money from the Vatican and European community for his many projects, but that does not mean that in the beginning he was not also a dreamer,” he said.

“I believe in miracles,” he said. “Some group had to deal with this issue. Call it a mission with which we have been entrusted.”