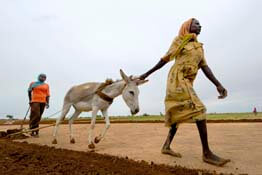 NYALA, Sudan – An ecumenical relief organization working in Sudan’s Darfur region is hoping to undercut violence by educating displaced people about human rights and peace.
For instance, the organization – Darfur Emergency Response Operation – has helped displaced women build more efficient cooking stoves, lessening the number of trips they have to make out of the camps to forage for firewood – journeys that often result in rape by Arab militia members.
After police failed to respond to the women’s complaints about rape, the ecumenical organization began educating women about their rights, while training local paralegal committees to accompany the women when they go to the police to report the assaults.
The Darfur Emergency Response Operation is a joint effort of Caritas Internationalis, the Rome-based network of Catholic aid agencies, and Action by Churches Together, a Geneva-based coalition of Protestant relief groups. In addition to providing a variety of humanitarian services – such as wells, latrines, health care and housing materials – to families in the displaced-people camps and neighboring communities, the operation also has conducted workshops for police and rebel groups on the rights of the displaced.
Adam Ateem, director of peace-building and protection activities for the ecumenical organization, said it was not easy at first to get the police to listen.
“The police should be the people most involved in protecting the IDPs (internally displaced persons), especially women and children. And we’ve had very healthy discussions with them,” he said. “They initially said they had national laws that they must enforce, but we told them that there are also international laws and principles about the rights of the displaced that they and everyone else must also obey and implement.
“The leaders of the police are getting their orders from politicians, however, and at the beginning none of them accepted us talking about protection of civilians. They said that was not something international nongovernmental organizations should worry about,” Ateem said.
When Darfur Emergency Response Operation officials insisted that the rights of civilians to live free from attack or torture be respected, Ateem said, the police accused them of supporting the rebels. But the ecumenical team persisted, and Ateem said the police slowly have come to accept at least some responsibility. Whereas the police originally ignored reports of rapes, Ateem said, they now will take the survivor of the attack to a medical center for treatment. They’ll also take a report of the attack, although Ateem said he knows of no case where a rapist has been apprehended.
The ecumenical organization is also laying a foundation for peace at the grass roots by fostering better communication between Arab and African communities, including exchange visits and the training of conflict resolution committees to negotiate small but significant accords, such as guaranteeing unhindered access to a water well or the ability to travel safely to a local market. Such daily improvements bridge the ethnic tensions that the government has taken advantage of in its militarization of the region, Ateem said.
While the Arab-African conflict is the most prevalent antagonism in the region, tribal disputes within each of those groups can sometimes lead to violence.
Near the town of Kubum earlier this year, a local reconciliation committee sponsored by the ecumenical organization stepped into a dispute between two Arab groups – on one side, farmers, on the other, cattle-herders – just as it began to turn into a larger political conflict. The government sided with the herders, the rebels with the farmers, but Ateem said the committee, which included members of African tribes, successfully mediated between the two Arab groups and worked out an amicable solution.
Tribal allegiances are deep-seated in the region and often are part of the problem.
Ateem studied law in the Sudanese capital, Khartoum, and said he has former classmates who have participated in the Janjaweed, or Arab militia on horseback.
“I ran into this old friend one day, and I asked him why, if he was so well educated, he had chosen to support the militias. He talked to me about his need to support his father and his tribe over everything else, even if the government is going to use them to take everything away from the Africans and give it to the Arabs,” Ateem said. “We’ve got to change this way of thinking.”