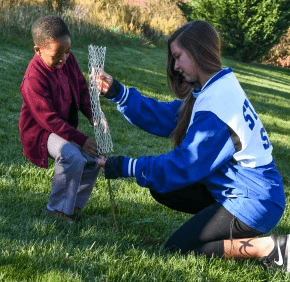 By Paul McMullen
pmcmullen@CatholicReview.org
Twitter: @ReviewMcMullen
GAMBRILLS – Students at The School of the Incarnation went outdoors Nov. 14 for lessons in environmental stewardship, forestry and the passage of time.

The Catholic pre-K to grade 8 school opened in 2000, before of any of its current students were born. Anne Arundel County’s approval of construction included an agreement to reforest a portion of the campus, a promise that came due in early September.

So it was that on the second Monday in November, 800 Incarnation students, helped by approximately two dozen apiece from Archbishop Curley High School in Baltimore and St. Mary’s High School in Annapolis, got dirty and planted 600 saplings on their campus.

“We didn’t look at this as a burden, we looked at it as an opportunity,” principal Lisa Shipley said. “We have a chance to take care of our world, show greater respect for our community – and partner with some of our high schools.”

It was also an educational experience for Shipley, who wanted her school to perform the day of service closer to Oct. 4, the feast of St. Francis of Assisi, known for his love of God’s creation.

Archbishop Curley High School junior Marcus Smith and School of the Incarnation kindergartener Talton Piotrowski, plant one of many seedlings at Incarnation during Earth Care Day Nov. 14. (Kevin J. Parks/CR Staff)
“That was before I learned that saplings have to live through two frosts before they can be planted,” Shipley said.
There was still a Franciscan influence in Curley High, whose chaperones included Conventual Franciscan Friar Matthew Foley, its campus minister.

Mike Gardiner was waiting in the Incarnation lobby when a bus pulled up with his Curley schoolmates. A 2015 graduate of Incarnation, he was dropped off there along with three younger siblings, eighth-grader Anna, sixth-grader Timmy and second-grader Nick.

“They were excited to have their day shaken up,” Gardiner said. “They got to wear their P.E. (physical education) uniforms on a non-P.E. day, and they were pretty energetic at breakfast this morning.”

Gardiner’s preparation included briefing the Curley crew on their destination.

Students planted 600 samplings on the campus of The School of the Incarnation in Gambrills Nov. 14. (Kevin J. Parks/CR Staff)

“None of my classmates had heard of School of the Incarnation,” said Gardiner, who worships with his family at St. Joseph in Odenton. “This place had a huge impact on my life.”

Admissions director Tina Allen brought the contingent from St. Mary’s High, which included members of its Ambassador Club and those taking Environmental Science. Last year that class included Rebecca Osborn, a 2013 graduate of Incarnation who worships at Our Lady of Perpetual Help in Edgewater.

“This is a great opportunity to give back to the school that gave so much to me,” said Osborn, who was hoping to catch up with Mary Nolte and Terri Mudd, who teach religion and math at Incarnation, respectively.

Before they headed outside to help after lunch, two of Julie Bayer’s seventh-grade science students provided an impromptu briefing on photosynthesis for a visitor.

“I’m excited to be a part of this,” said Maddie Heathcott, who worships at Our Lady of Sorrows in West River, where her father, Brent, serves as a deacon.

“The best part of this is that we’ll get to see them (the saplings) grow every day,” Max Greene said.

Shipley said that the National Arbor Day Foundation provided a bargain rate on the 600 saplings. Another partner in the project was Lawn Wrangler Landscaping, a locally-owned company which donated a portion of the man hours required to replace 34 ash borer-infested trees on the front of campus and three more out back.

Felicia Giordano, an employee, is a former Incarnation parent.

“She said Lisa (Shipley) needed help with some trees,” said Jon Vander Vliet, the owner of Lawn Wrangler Landscaping. “Within a few minutes of talking to Lisa, I was impressed with her vision. She took lemons, and turned it into lemonade.”

For more photos or to order prints, visit our Smugmug page here.

Stranded seafarers in Baltimore aided by Apostleship of the Sea