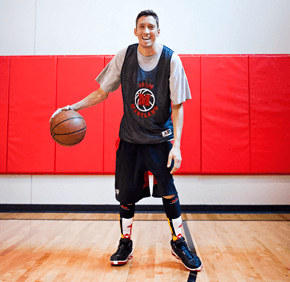 By Maria Wiering
mwiering@CatholicReview.org
LIBERTYTOWN – Basketball, volleyball and a 5K are on Daniel Nisonger’s docket for a national sports competition in July. He plays sports often, but one thing distinguishes his new teammates from anyone he’s played with before: They’ve all given or received organ, eye or tissue transplants.
Nisonger, an employee and parishioner of St. Peter the Apostle, is among 32 competitors representing Maryland in the Transplant Games of America July 11-15 in Houston.
When the 32-year-old was diagnosed at age 16 with an autoimmune liver disease, his doctor told him he’d need a transplant within five years. He made it to 15 before going on the transplant list, where he waited for a year and a half as his body jaundiced.
At first, he sought a living donor, and more than 40 people – most from St. Peter – came forward to try to meet the criteria. No one who tested, however, was a perfect match. Then, on Sept. 24, 2011, he got a call: He had been matched to a liver from a recently deceased donor.
He underwent a life-saving surgery that day.
Nisonger’s recovery was long – three months in the hospital, three months on bed rest and three months in therapy. Support and prayer from his family and St. Peter parishioners sustained him before and after his transplant, he said.
“From day one, the power of prayer played a large role in being able to get through it all,” he said. “I have been able to see how selfless others are, and that’s the person I want to be.”
St. Peter’s marketing and event coordinator, Nisonger is in the process of trying to connect with his donor’s family, he said. He sees his role on Team Maryland as a tribute to the “second chance” their loved one’s donation gave him.
“I thank God every day I can wake up and have a normal day,” he said. “Without God I would not be here.”
The Transplant Games are held biennially in cities where greater organ donation awareness is needed, Nisonger said. More than 122,000 people are awaiting an organ transplant in the United States, according to Donate Life America, a nonprofit that promotes organ, eye and tissue donation and partners with the Transplant Games of America.
Nisonger loves basketball, where at 6-feet-3-inches and 175 pounds, he is a veteran forward. The games, however, are more about camaraderie than competition, he said. Team Maryland’s oldest member is in his mid-60s. The youngest is 7, a heart recipient.
The games typically attract people who were physically active before their transplants, said Latrice Price at the Living Legacy Foundation of Maryland, which works with organ donors and their families and manages Team Maryland.
“This shows that even though you have a transplant, you’re not down and out and can’t do what you did previously,” she said.
This year’s games are expected to draw the most competitors – as many as 3,000 – since its 1982 founding, Price said.
Events range from cycling to the more causal cornhole, or bean-bag toss. Nisonger is competing in the latter; his partner is a double lung transplant recipient.
Nisonger’s wife, Melissa, will accompany him to the games. “I’m really proud of him,” she said. “I’m very happy that he cares enough to do this. There are people who get transplants and it doesn’t really change their lives. He feels really grateful to the person who donated his liver to him.”
In addition to raising organ donation awareness, the games also honor living and deceased donors and their families.
“The real hero of this story isn’t me, but the man who isn’t here to tell it,” Nisonger said. “It’s because of him that I am still blessed to be with my wife, Melissa, my family, my community and my church.”
Also see:
Mount de Sales grad says bone marrow donation strengthened faith
Mount St. Joseph student saves lives through organ donations
Basilica rector undergoes bone marrow transplant
Seven Loyola hospital employees donate kidneys to strangers
Virginia man receives kidney from pastor
PrevNext