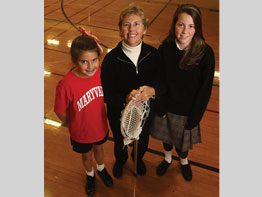 Mary D’Ambrogi no longer draws double-takes when she works a sideline at a sports event.

She still elicits laughs, however, recounting her days as a pioneer in the game of lacrosse, when her presence in what was viewed as man’s domain rankled some.

That allowed her to combine her love for granddaughters Ana, 14, and Caroline, 11, with a passion for sports that wasn’t easy to display when she played six-a-side basketball for Notre Dame Preparatory School, Towson, before Title IX federally mandated gender equity for females.

Mrs. D’Ambrogi got her start with a whistle at the School of the Cathedral of Mary Our Queen, Homeland, where she and her husband Don took turns coaching their four children. That included Mom coaching son Trey, the father of Ana and Caroline.

“You’re a girl,” came the taunts from opposing coaches.

She made quick in-roads.

“About 1974, I went to an organizational meeting for the Maryland Youth Lacrosse Association and was told I was in the wrong room,” Mrs. D’Ambrogi said. “By the end of the meeting, I was one of the boys. I had an unbelievable team that year, with a lot of kids who became great college players. We beat everyone, but it was a pretty easy group to coach.”

Mrs. D’Ambrogi remained a gadfly, whether it was objecting to adults who placed too great an emphasis on winning or encouraging administrators at girls’ high schools to become more pro-active regarding burgeoning athletic scholarship opportunities.

Her organizational skills have been put to use by nonprofits beyond youth lacrosse, as she worked for Catholic Charities, the Maryland Catholic Conference and the St. Vincent de Paul Society, where she served as the director of prison ministry for the Archdiocese of Baltimore.

“You work with parishes and solicit volunteers, a unique group of people,” Mrs. D’Ambrogi said. “We had volunteers take tape recorders into prison, and have mothers read to their children. The ones who couldn’t read, we tutored.”

Mrs. D’Ambrogi developed her leadership skills in a Govans household where she was the youngest of six among a group that consisted of a sister, Peggy, and four brothers, all college lacrosse standouts at Duke University or the University of Maryland. As commissioner of the Atlantic Coast Conference, her brother Gene Corrigan was arguably the most powerful person in college athletics a decade ago.

“In Baltimore,” he said at the time, “Mary’s the one they call commissioner.”

Mrs. D’Ambrogi thought her coaching days were over, until she was recruited by her granddaughters.

“Ana surprised me last spring, when she asked me to coach her middle school lacrosse team,” Mrs. D’Ambrogi said. “I was excited, even though with kids that age, grandparents aren’t always cool to have around. It wasn’t what I had in mind, but how do I turn that down?”