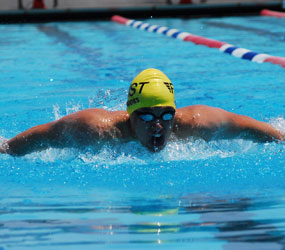 A senior at St. Maria Goretti High School in Hagerstown, Brower chose a school that doesn’t sponsor football, a sport he longed to play at the interscholastic level. Playing soccer instead, he joined the swim team as a freshman just to improve his fitness.

After two years of high school soccer, Brower became a year-round swimmer. The pool has become a second home, as he finds tranquility the moment he hits the water.

“I like being able to swim and think about everything that happened during the day – it’s a way of relaxing,” Brower said. “When I have problems on my mind, I can just think about whatever I need to while I’m swimming.”

While the water has a calming effect, there’s nothing passive about Brower in competition.”

“When you get on the blocks during a meet, you get that sudden burst of adrenaline,” he said. “You feel like you’re on top of the world for a moment, and that feeling is just amazing.”

Brower holds the Goretti record in the 100 butterfly and two relays. He also holds the 100 fly record for the Frederick Area Swim Team, his club.

“The thing that sets him apart is that he’s very humble,” said Goretti Vice Principal Bridget Bartholomew. “He doesn’t draw attention to himself. He’s a young man of integrity – exactly the type of student we like to see here. You know he’s going to go on to bigger and better things.”

Brower has been accepted into the pre-med/health advisory program at College of the Holy Cross, where he plans to keep swimming.

“He has a really big heart for Special Olympics,” said Bartholomew. “He pretty much brought his involvement with the Special Olympics swim team to the school. I’m pretty positive he plans on continuing that as well in college. He just has a really kind and compassionate heart.”