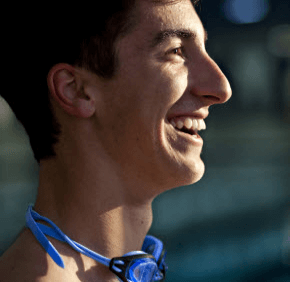 Mitchell Swope is a leader at church, school and in athletics.

A senior at St. Maria Goretti High School and a parishioner of St. Joseph, Emmitsburg, the 17-year-old has been an altar server since the fourth grade. He played the guitar at teen Masses from seventh grade through his junior year.

As a student representative on the parish council, Swope has learned “a business aspect of the church.”

He has traveled with other students from the Hagerstown school to Pennsylvania and Virginia to volunteer for a week the past two summers through Catholic Heart Workcamp, whose volunteers revitalize communities and beautify homes for the disabled, elderly and impoverished.

“It’s a lot of fun,” said Swope, who hopes to volunteer again in summer 2013. “You see things you never expect to see. You change things.”

Swope is in the school’s club for students with more than 200 community service hours; he has earned more than 500.

Heather Nees, the school’s campus minister, said Swope has “a big heart for helping the poor. … He’s just a kid who’s always got a smile on his face. He asks people what he can do to help out.”

Swope is involved with Rosary Group, students who pray the rosary weekly; Positivity Club, which spreads cheer; International Club; Art Club; homecoming and prom committees; and Students Against Destructive Decisions. He has also been the varsity basketball manager.

Swope, who attended Mother Seton School in Emmitsburg from kindergarten through eighth grade, credits his Catholic education as “a big, big factor in my life.”

“With Catholic education, you can (embrace) your religion and you’re accepted for that,” Swope said. “It’s what I’ve been raised to know.”

Swope swims on St. Maria Goretti’s team, which he joined his sophomore year “to stay competitive with running.” He swims breaststroke, freestyle, the individual medley and can help on relays. The first home meet is Dec. 15.

“I’ve always seen training as important to anything you do because you should be prepared, so I always ran,” said Swope, captain of the cross country team.

He was first overall at the Inter Parochial School League 2011 cross country championships, and led Goretti to the team title.  An injury in September sidelined him for most of the 2012 season.

Swope has played varsity soccer. Next spring, he expects to run on the school’s new track team.

Swope, who “adamantly” wants to run in college, has applied to five colleges, including Mount St. Mary’s University in Emmitsburg.

David Blenckstone, St. Maria Goretti’s athletic director, said Swope “has an incredible energy and a great sprit about him in everything that he does.”

“He got injured (in cross country) this year, but he was still there on the sidelines and cheerleading,” Blenckstone said. “He never pouted, never sulked. He’s a great model for the younger kids.”

Credentials: Member of National Honor Society and National Art Honor Society; member of parish council at St. Joseph, Emmitsburg; has been involved in four sports teams at Goretti, spring track would be his fifth