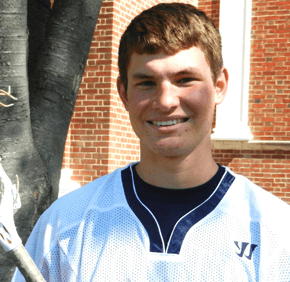 By Elizabeth Skalski
eskalski@CatholicReview.org
Clarence Wroblewski developed an interest in soccer as a youth, began swimming competitively to spend time with his friends and decided to play lacrosse for his high school’s newly minted program.
“Soccer was just a great hobby of mine my dad got me into,” said Wroblewski, 18, a senior at St. Maria Goretti High School in Hagerstown. “My friends got me into swimming – I got really good at it and kept on with it.”
He started playing soccer as a 3-year-old and lacrosse at age 5, both of which his dad taught him to play. He has been on the school’s soccer, swimming and lacrosse teams all four years of high school.
Wroblewski is a forward in soccer; swims the 100 butterfly, 200 individual medley, 100 freestyle and 200 freestyle relay; and is a midfielder in lacrosse.
“With all the work I put into (lacrosse),” Wroblewski said, “I think it came very, very natural. I love to run.”
When a lacrosse program came to St. Maria Goretti as a club sport his freshman year, Wroblewski gave the team a shot.
“The school was looking for anyone to play,” said Wroblewski, who was an immediate starter.
Lacrosse became a varsity sport at the school last season. Wroblewski said the Gaels have won games this season they would have lost in previous seasons.
He had envisioned playing soccer in college, but Wroblewski said that since starting high school, he has “realized how competitive it is.”
“I realized I didn’t really want to continue trying to be a really distinguished soccer player,” Wroblewski said. “I didn’t have the exact talent to reach up to (my competition’s) potential. I focused a lot of my time in the lacrosse program.”
Wroblewski, a B-student, has not yet selected a college. He has applied only to Catholic institutions. Whereever he goes, he plans to play intramural lacrosse and swim recreationally.
He has been accepted to The University of Scranton (Pa.); Wheeling (W.Va.) Jesuit University; Regis (Mass.) College; and Fairfield (Conn.) University.
A parishioner of St. Andrew Catholic Church in Waynesboro, Pa., Wroblewski participates in the parish’s Knights of the Holy Temple and is an altar server.
“The Catholic faith has made a very, very big impact on my life,” said Wroblewski, the oldest of four siblings.
Wroblewski said his dad, a retina surgeon, has taught him “throughout my life how to contribute back to the community, to contribute to Jesus.” The two have traveled together to the Yucatan Peninsula in Mexico several times since 2008 to help people whose eyesight is affected by diabetes, Wroblewski said.
“It’s a witness of my faith,” Wroblewski said, “in that I feel like I am contributing back to the world like our God intended for us to do.”
Clarence Wroblewski
St. Maria Goretti
Senior
Credentials: 3.01 GPA; altar server, member of Knights of the Holy Temple at St. Andrew Catholic Church Waynesboro, Pa.; member of soccer, swimming and lacrosse teams at St. Maria Goretti
Copyright (c) May 5, 2012 CatholicReview.org
PrevNext