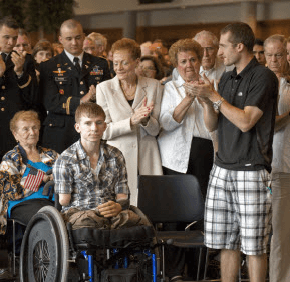 Readers of the Catholic Review might be familiar with Brendan Marrocco, the Iraq War veteran who is making national news after undergoing a rare double arm transplant at Johns Hopkins Hospital in December.

Marrocco appeared on the cover of the July 1, 2010 issue of the Review, after being honored at Mount St. Mary’s University in Emmitsburg during the blessing and dedication of its Veterans Walkway, a 252-foot-long tribute to alumni and members of the community who have served in the military.

Marrocco’s niece, Chelsea, a member of Mount St. Mary’s Class of 2012, was then the head of the school’s Veterans Club.

According to news reports, Marrocco, a native of Staten Island, was the first soldier in either the Afghanistan or Iraq wars to survive losing all four limbs in combat.

As the Catholic Review had reported in 2010, U.S. Specialist Marrocco had volunteered for a tour in Iraq. In spring 2009, the armored vehicle he was driving tripped a roadside bomb, and he lost his arms and his legs in the explosion.

At a news conference Jan. 29, Hopkins officials said that only six other patients in the United States have undergone a successful double-arm transplant.

At the Mount, meanwhile, donors can memorialize or honor a veteran by sponsoring a bench, flag pole, service plaque or brick along the walkway, on the north side of Patriot Hall.