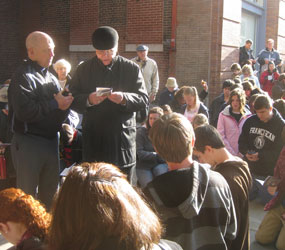 As morning traffic passed by and the clanging of lightrail cars filled the air, more than 200 Catholics stood solemnly across the street from a Planned Parenthood abortion clinic in downtown Baltimore April 22.

The last stop in the Good Friday Way of the Cross that began at St. Alphonsus, the gathering was meant to touch hearts and ask for divine assistance in bringing an end to abortion.

Archbishop Edwin F. O’Brien led the spiritual walk, with many of those gathered kneeling on the sidewalk to pray the Stations of the Cross. At the Howard Street abortion clinic, participants of all ages prayed the Sorrowful Mysteries of the rosary. Somberly walking back to St. Alphonsus, they prayed the Divine Mercy chaplet.

About a dozen women went inside the clinic as the morning vigil proceeded – the majority of whom sought abortions, according to a handful of Catholic sidewalk counselors who offered them spiritual and material help carrying their unborn children to term.

“Most of the people we talked to already have kids,” said Mary Bergin, a parishioner of St. Thomas Aquinas in Hampden and one of the counselors. “They’re single, and they feel like abortion is their only choice because they can’t afford to raise more kids.”

“For some reason, they think it’s a crueler punishment than having the baby,” Bergin lamented.

Although the prayer vigil may not have changed any minds that day, participants said it made a difference.

“You can see the faces of the people who are watching us from Planned Parenthood, said Debbie Cook, a parishioner of St. Thomas Aquinas. “You see that something’s getting through to them. If it gets into their hearts, sooner or later, something will happen for the good.”

Eileen Lohrmann, a parishioner of St. John in Westminster, agreed that the vigil was making a difference spiritually.

“Only God can see that,” she said. “We believe it is softening people’s hearts.”

Lohrmann’s 18-year-old son, James, called it a “real privilege to come out here and be with my Christian brothers and sisters and pray for all the people being slaughtered at the abortion mill.”

At the end of the vigil, Archbishop O’Brien crossed Howard Street and personally thanked the sidewalk counselors for their efforts.

To purchase photos of the event, go to CatholicReview.org/photos.