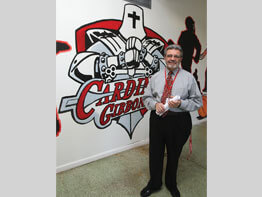 After nearly 43 years of leading The Cardinal Gibbons School students from one stepping-stone to the next, educator Don DelCiello will be making a leap of his own – into retirement.

“Mr. Del,” as he is known affectionately by students, is slated to retire Jan. 30 after serving as counselor, classroom teacher, vice principal, principal, director of guidance and various other roles at the Baltimore school.

Sitting in the school guidance office, surrounded by college pennants in a rainbow of colors, the 66-year-old teacher carefully nudged up his silver wire-rimmed glasses, and reminisced that no matter what position he held at the school, he was “always in the classroom.”

“I felt at home here,” said Mr. DelCiello, explaining his tenure at the school. “I think from the very beginning it was the Marianists (on staff). They drew you into their community, not just the school community, but their lives, too.”

His colleague and friend Philip J. Forte, who met Mr. DelCiello as a freshman at Cardinal Gibbons in 1969, described him as “the epitome of what it means to be a dedicated educator.”

“He always puts kids and colleagues ahead of his personal needs and wants,” said Mr. Forte, who serves as director of LaSallian Mission at the 400-student school. “He embodies everything I’ve always aspired to be.”

Mr. DelCiello, whose Italian name and reputation as a stern and demanding, albeit fair, educator earned him the unofficial title of “The Godfather of Gibbons,” said he is retiring to spend more time with family.

Prior to his teaching career, the graduate of St. Katharine of Siena School in Baltimore attended St. Charles College, a seminary in Catonsville, then St. Mary’s Seminary in Baltimore.

Mr. DelCiello said he had some good teachers in his life and felt it was his calling to be an educator. He began teaching English and Latin at Cardinal Gibbons in 1966, marrying his wife of nearly 42 years, Jean, in February 1967.

“He has touched a lot of lives,” said Mrs. DelCiello. “He knows the name of every kid, and his door was never closed.”

Mr. DelCiello, who is currently serving as director of guidance, said Cardinal Gibbons has been a home away from home for him, with staff and parents often inquiring about his family.

He spoke of the Latin word educo, which means to lead from one place to another.

“That’s how I see my work here – taking a group of kids from this place here to the next step,” he said.