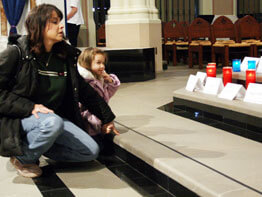 OMAHA, Neb. – In a time of great sadness and pain, God remains present as a source of comfort, an Omaha priest said in his homily at a Dec. 6 prayer service for the victims of shootings the day before at one of the city’s shopping malls.

“We turn to God, not because God will reveal answers to all of our questions, but because God is faithful to his promise: to walk at our side in times of sorrow, even as he does in times of joy,” Father Harry Buse, pastor at St. Leo Church in Omaha, told a capacity crowd of family, friends and co-workers of the victims.

St. Leo Church is located just blocks from Westroads Mall where 19-year-old Robert Hawkins entered the Von Maur department store Dec. 5 around 1:30 p.m. with an AK-47 assault rifle and randomly shot and killed eight and wounded five others before turning the gun on himself.

On the night of the shootings, a candlelight vigil at St. John’s Church on the campus of Jesuit-run Creighton University was the first public gathering.
A midday prayer service was held at the campus church Dec. 6. Also, a bell rang for each victim, including the shooter, as candles representing them and the wounded were carried to the altar.

The St. Leo service followed that evening; it was the home parish of one of the victims, 53-year-old Diane Trent.

Victim Janet Jorgensen, 66, was a Von Maur employee and a member of St. James Parish in Omaha. Thirty-six-year-old Angie Schuster, also an employee, was a parishioner of St. Robert Bellarmine Church in Omaha.

The other deceased include store customers John McDonald, 65, of Council Bluffs, Iowa, and Gary Scharf, 48, of Lincoln, Neb., as well as three store employees from Omaha – Maggie Webb, 24; Gary Joy, 56; and Beverly Flynn, 47.

At the St. John’s service, Jesuit Father Roc O’Connor, rector of the Jesuit community at Creighton, asked the 800 people gathered to be “men and women for others” in the face of tragedy.

“The men and women of Creighton University have always been here for each other,” he said. “Today is no different and that makes us a special community.”

Victim McDonald was a graduate of Creighton University, as is one of the wounded shoppers, 34-year-old Jeff Schaffart.

Ministering to people in times of tragedy is common for priests, but not normally a situation of this magnitude, he said.

“I am aware that as a priest times come where we are called to be part of sad and tragic situations of various kinds, but the magnitude of this is certainly unexpected,” he told the Catholic Voice, newspaper of the Omaha Archdiocese.

“Certainly these tragedies remind us of the brokenness of the human condition, of the fact that sin is part of our lives as humans,” Father Buse said. “But it also reminds us to remember that Jesus rises above all of that.”

One of the last victims to be identified was Trent. Her family had been in agony waiting for the news. Father Frank Dvorak, one of several chaplains for the Omaha Police Department, ministered to them as they waited at the Hampton Inn across the street from the mall.

“It’s like any tragedy. To be able to be present to people suffering many times is really more important than what we say,” the priest said. “The presence we give to people in that time lets them know that they aren’t alone.”

While mourning the loss of the victims, Father Dvorak said that as Christians we can’t forget to pray for the shooter.

“If we really have faith that Jesus died for everyone we recognize that we can do some drastic evil things and be forgiven,” he said. “We don’t believe God will judge harshly those who are not sane. So when you think about the young man we should be thankful God is merciful.”

A tragedy like the mall shootings provides the opportunity for people to remember what the season of Advent is about and ask themselves if there is a place for Jesus in their lives, he said.

“God is always with us,” Father Dvorak said. “If we don’t have that relationship with God, then maybe this is a call to begin to find out what’s missing in our lives and to open ourselves up to the hope, peace and true joy that Christ brings.”