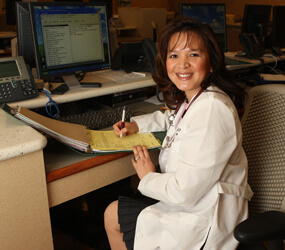 As Jennifer N. Lieu looks at a faded, thumb-size photo of a toddler with jet-black hair, her brown eyes soften and tear up.

The photo is of her, at nearly 2 years old, crying as she holds up her green card number for immigration officials.

“It’s my most cherished possession,” said the now 35-year-old Vietnam native as she sat in her office at St. Joseph Medical Center, Towson, on a recent afternoon.

The Catholic Community of St. Francis Xavier, Hunt Valley, parishioner has come a long way since April 30, 1975, when she and her family escaped Vietnam during the fall of Saigon to the North Vietnamese. The wife and mother of two, who was named St. Joseph Employee of the Year for 2009, believes it is a journey in which God guided her and her family every step of the way.

Although as a toddler she was too young to remember the family’s escape from the country, her older brother describes April 30 as the day her anti-Communist father “prepared us to die.”

“He sent my mom to the market to buy whatever she wanted because he didn’t think we would live,” said Lieu. “He thought it would be our last meal.”

A member of the South Vietnamese Navy stationed at the Dao Phu Quoc base in the Gulf of Thailand, Lieu’s father managed to transfer his family to a small boat. Adrift at sea for hours, the smaller boat established contact with a larger vessel and Lieu said her father, whom she described as “a tiny little man,” carried her and her three siblings on his back up a rope ladder onto the boat.

The family arrived in the Philippines and from there was transferred to an American cargo ship, which brought the family to a refugee camp in Guam. Lieu said her family wound up on a cotton farm in Arkansas, where the closest Catholic church was an hour away. Lieu said her father had to use nearly all of his salary to secure a ride. The family requested a relocation from Catholic Charities and ended up being sponsored by St. Pius X, Rodgers Forge.

Within a few months, the family moved into a townhouse. Lieu’s father found work as a machinist, and her mother became a housekeeper at Stella Maris. Learning the language was the most difficult challenge the family faced, said Lieu, who attended St. Pius X School for eight years.

While the transition had its challenges and the family was poor, Lieu said she believes everything she experienced led her to become the person she is today.

It was growing up as a child without health insurance and never understanding what was happening when her parents were sick that fueled her desire to become a nurse.

“I wanted to become empowered by the knowledge the medical field could provide and teach others,” she said.

A nurse practitioner who works for The Heart Institute at St. Joseph Medical Center, where she specializes in heart failure, Lieu said she feels like the Towson hospital is home for her.

“The values of St. Joseph are what I believe in,” said the employee of 14 years. “When you first come here, the first thing they dwell on is their values – reverence, integrity, compassion and excellence.”

While she feels the Employee of the Year award is absolutely a team effort, Lieu said she attributes her professional success to her religion.

“First is the grace of God,” she said. “Personal success came to me through my family and my self-motivation to become a better person professionally as well as spiritually. I try to dwell on the positive. You can learn a lesson from everything, and I am so blessed.”