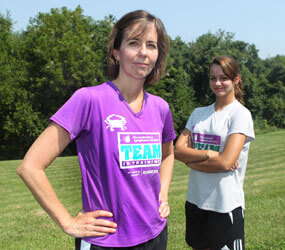 Joann Phillips is preparing for the Care First Blue Cross Blue Shield Half-Marathon at the Oct. 16 Under Armour Baltimore Running Festival. Covering 13.1 miles when it’s been over 20 years since she last raced as long as 6.2 seems like a daunting task – until it’s weighed alongside the courage of the daughter who inspires her effort.

Phillips is a member of the Leukemia & Lymphoma Society’s Team in Training, collecting sponsors and pledges to combat the cancer that nearly took her middle child. Acute lymphoblastic leukemia and ensuing complications first shook the life of Erin Phillips and those around her in September 2001.

“It’s pretty cool,” Erin said of her mother’s fundraising effort. “I’m proud that she’s doing this for me, but I’m not surprised.”

Erin, 17, has had a clean bill of health for several years. She’s a rising senior at Maryvale Preparatory School, a member of its soccer team and exploring prospective colleges for fall 2011.

Like her older brother, David, and younger sister, Caroline, Erin attended Sacred Heart School in Glyndon, where her mother is a math and science teacher in the upper grades.

Joann Phillips also devotes considerable time to spreading the news that September is Childhood Cancer Awareness Month and thanking the institutions and people who supported Erin.

“Neighbors would bring over meals worthy of Thanksgiving, and watch Caroline on a moment’s notice,” Joann said. “There’s no way I can thank every person.”

Monsignor Lloyd E. Aiken, the pastor of Sacred Heart, gave his cell number to the Phillips family and told them not to hesitate to call. Anne Price, then the principal of Sacred Heart School, traveled to Omaha to see Erin and her family in 2004, when she spent a month at Children’s Hospital.

In Nebraska, Erin was treated for anorexia, as her weight had plummeted after two years of cancer treatment. She was one of the subjects of a December 2005 Newsweek article on the possible link between childhood cancer and eating disorders.

“You’re 10 years old, and you’ve beaten leukemia,” Joann said. “There’s light at the end of the tunnel, it’s supposed to be a happy time, then to deal with an eating disorder. Our world was consumed for two years. I have a love-hate relationship with SpongeBob SquarePants, from watching it in the hospital so much.

“All these years later, I felt I was supposed to do something ridiculous.”

Joann is no stranger to competitive athletics, having played volleyball and basketball for Immaculata University outside Philadelphia in the early 1980s, albeit after the college’s heyday as a national hoops dynasty. She and her husband, Scott, were regular joggers, until the time she became a mother.

Now 47, Joann logs 15-20 miles per week, taking longer runs on the NCR Trail and working the hills in Patterson Park.

“If Joann believes in something, she’ll work and work and work at it,” said Mary Renehan, the assistant principal for the middle school at Sacred Heart. “She’s always been a person to reach out to others.”

For more information, go to teamintraining.org/md/balt10/joannphillips.