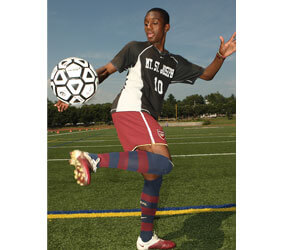 Jalen Robinson may just be a junior now, but he’s already an international man.

Robinson, a 16-year-old student at Irvington’s Mount St. Joseph High School, played on the U.S. U-18 national soccer team this summer, matching up with national teams in Argentina and Chile.

Robinson previously played on the U-15 squad and was asked recently to be on the U-20 team, which would have started play in September.

“I always make sure that school comes first,” he said.

When Robinson’s mother told him about the invitation to play for the U-18 team, he was taken aback.

“I thought she was messing with me,” Robinson said. “It’s an honor to be chosen for a team like that. I just wanted to do my country proud.”

Once in Argentina and Chile, he faced bigger and stronger players in host countries where soccer was integral to the culture.

“Mentally, I just had to be tough,” Robinson said. .

Although this year’s U.S. team was 0-4 during its 10-day trip, Robinson was not disappointed.

St. Martin is hoping Robinson can continue to progress at Mount St. Joseph, which won the Maryland Interscholastic Athletic Association A Conference in 2009. The coach is looking for his budding star to be more selfish in certain situations at center-midfield and look to score.

Robinson will take part in the November National Youth Leadership Mission, which is sponsored by the Anti-Defamation League (ADL).It is designed to promote understanding and equality. Mount St. Joseph has had four students participate in the program the last two years.

Kevin Shearer, guidance counselor at Mount St. Joseph, said: “For MSJ to have four students selected two years in a row is quite a compliment to our students and to our faculty.”

He has his eyes on helping his team defend its championship.

“There are no easy games in the MIAA,” he promised. “We just have to match their intensity.”