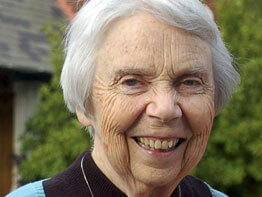 WASHINGTON – An unsolicited comment from a high school girl kept one of the most popular hymns of the Second Vatican Council era, “I Am the Bread of Life,” from meeting an untimely fate.

Mercy Sister Suzanne Toolan, who composed the song, said she had been asked to write a song for an event in the Archdiocese of San Francisco – possibly a eucharistic event, she recalled –and was writing on deadline.

At the Catholic girls’ high school in California where she was teaching in 1966, Sister Suzanne used an unoccupied room next to the school infirmary to finish what became “I Am the Bread of Life.”

“I worked on it, and I tore it up. I thought, ‘This will not do,’” she told Catholic News Service in an Oct. 16 telephone interview from her order’s convent in Burlingame, Calif. “And this little girl came out of the infirmary and said, ‘What was that? That was beautiful!’ I went right back and Scotch-taped it up.”
The rest, as they say, is history. But history takes time.

Sister Suzanne said the song was “not particularly well received” in San Francisco, but she credited “a very gifted Sulpician” named Father John Olivier at a seminary near the Burlingame convent with helping get the word out about her songs.

“He would come to our convent on Saturdays, so we’d have a decent homily every week,” she said. “He began to hear some of my things and he took it back to the seminary. And that’s how I think most of my things got out.”

“I Am the Bread of Life” is not only in all manner of Catholic hymnals, but also is in the official hymnbooks of the Episcopal, Lutheran and Methodist churches. “People keep giving me copies of it when they go to Europe or Asia, even,” Sister Suzanne said. “It’s in different languages. It’s thrilling.”

She alluded to “the problem some critics have allowing the congregation to sing words that Jesus has spoken.”

She left the phone to scurry to find a copy of a column from one of those critics, Catholic press columnist George Weigel. “Weigel calls it ‘that – I can’t even pronounce it! – hymn,’“ she said, spelling the word “ubiquitous.”

“My answer is: Do we really think we’re saying ‘I am the bread of life “ and that ‘I’ is the assembly? I don’t see why we can’t use that as a prayer,” she said.

Sister Suzanne sees another problem inherent in the hymn, though: “It’s a hymn that really shouldn’t work for the congregation. It’s too low. It’s too high. I often ask myself: Why does it work so well, then? I think it’s the Scripture. The Scripture is so strong.”

She took it upon herself to make the lyrics more inclusive, including changing the original “I will raise him up” in the chorus to “I will raise you up.”

“I did that a long time ago, but other people have done it, too,” she said. “As soon as that awareness (about inclusive language) came in, I couldn’t live with it (the original) anymore.”

Sister Suzanne, who was to celebrate her 80th birthday Oct. 24, is not only a liturgical music composer, but now an author as well, getting credit as a co-author with Elizabeth Dossa, communications officer for the Mercy Sisters in Burlingame, for a book titled “I Am the Bread of Life.”

“I have a hard time with … being the subject of it,” Sister Suzanne said, adding that when Dossa first sat her down to interview her on her life and ministry, she thought it was for some other purpose. “It’s kind of dumb of me, but I didn’t know I was writing a book,” she said.

Dossa came back to Sister Suzanne the next week, “so I thought she was looking for some more quotes,” she added. “Finally dodo,” she said, referring to herself, “realizes what’s going on.”

Born Gloria Toolan in Lansing, Mich., she took her sister Suzanne’s name when she entered religious life 57 years ago, because “I hate” Gloria, she noted.

Sister Suzanne said she holds a unique record among Sisters of Mercy. “I’m the only one in the community who’s always stayed here in the motherhouse,” she said. “It’s a beautiful, wonderful property. When they made the (assignment) changes, I’d always hide.”

Her call to religious life, she said, “came pretty early on, even in first grade. We had this kind of strange but wonderful nun” – a Mercy sister – “who used to play the organ,” she recalled. “I thought, ‘Gee, I want to be a nun and I want to be an organist.’“