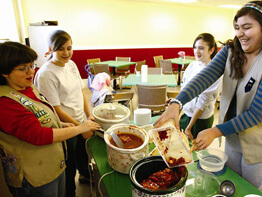 Every Friday night during the season of Lent, Girl Scout Troop 1881 from St. Michael the Archangel, Overlea, cooks up faith and fellowship by inviting fellow parishioners to partake in a meatless feast before praying the Stations of the Cross.

The troop has served grilled cheese and soup and vegetable lasagna, and will continue to serve a different meal each week.

The event has unified the troop and served as a teaching tool.

Angela Kastrunes said she has learned to be a better cook while Maggie Lawder, 12, said she has enjoyed hosting the event.

“They have done so much for us; it’s nice to give back,” said Maggie with a smile.

St. Michael’s pastor, Father James Proffitt, asked the troop to take over the dinner, which was previously run by a different group, to “add a breath of life and youth to it,” said Dorothy Taylor-Kastrunes, one of the troop’s leaders.

The troop has done exactly that. Last year’s turnout was a little more than 15 people, and this year’s attendance has skyrocketed to some 50 people.

The girls decided to take on the project to earn their silver award, which represents a girl’s (ages 11-14) accomplishments in Scouting and her community.

“The project’s goal is to improve the life of the individual girl as well as her community,” said Ms. Taylor-Kastrunes. “Each girl needs to play an individual leadership role and serve at least 40 hours for the project.”

Each girl has played a part in the Lenten meal project from public relations to budgeting. Many of the girls spoke at Masses, personally inviting parishioners to attend the dinner and to ask for donations. The girls needed money for supplies for the free meal.

The remaining money, however, will be given to the parish or the school, said Marissa Julis, 12.

“The meal is free so you don’t have to worry about spending money,” said Angela, who said she served a family of 10 who loved the event so much they promised to come back every Friday.

All of the girls agreed that it felt good to help the parish and see smiling faces.

“It’s nice to know that people are enjoying it,” said Marissa. “It takes stress off of the people because they don’t have to cook.”