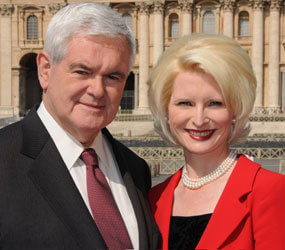 Stroll through the local bookstore and you’ll come across copies of his more than 20 books, including the recently released “To Save America: Stopping Obama’s Secular-Socialist Machine.”

On top of it all, he is considering a run for the presidency in 2012.

And in early June, Gingrich and his wife, Callista, were in Warsaw, Poland, and then Rome for the debut of their new documentary, “Nine Days That Changed the World.” It chronicles Pope John Paul II’s nine-day pilgrimage to Poland in 1979 and examines the event’s significant role in the fall of Soviet communism.

“If you look at most of the secular history of the period, they don’t cover the impact of the church,” Gingrich said in a May 24 telephone interview with The Southern Cross, newspaper of the Diocese of San Diego.

The couple made the documentary “almost as an act of devotion,” Gingrich said.

He explained that the idea for the film came about while he and Callista were interviewing various Cold War icons for an earlier documentary on former President Ronald Reagan.

The couple planned to discuss the film and other religious-themed projects of theirs when they address the Mother of Life Conference in San Diego Aug. 14.

The main theme of their speech will be the moral and religious implications of today’s court rulings on such issues as abortion.

Gingrich told The Southern Cross that he and his wife saw the conference “as an opportunity to reach out and talk with a number of people who had a deep concern about the future of America, who understood that life begins at conception, who are committed to reinserting values (into U.S. society).”

“We thought that it was really something that we had an obligation to do,” he added.

In their speech, Gingrich said he and his wife will focus on the God-given nature of freedom and how “no government can get between … God and you as an individual.”

“I think it’s very important to recognize that we are in a situation where, today, we have secular judges imposing secular law in a way that has enormous moral and religious implications,” Gingrich said.

Newt and Callista Gingrich were married in 2000. A lifelong Catholic, Callista sings in the professional choir at the Basilica of the National Shrine of the Immaculate Conception in Washington. Newt Gingrich entered the Catholic Church in late March 2009.

“I had been originally raised as a Lutheran and had become a Baptist,” he said, “but then over the last nine years, I had found myself more and more attracted to the church.

“And I don’t think I made a decision to convert,” he continued. “I think I became a Catholic and then realized it one day.”

“There was something about that week and seeing him,” Gingrich said, “and I just decided … that this was where I belong, this (was) the right thing for me.”

As for the upcoming Mother of Life Conference, he said he hoped participants will realize, with the leadership of the Knights of Columbus, pro-life supporters “have little reason to be afraid. The vast majority of Americans agree with us. It is actually a militant minority on the left that has been trying to change our country radically.”

He added that he hoped those who attend will leave the event “rededicated and recommitted to fighting for an America based on sound values.”

Presented by the San Diego chapter of the Knights of Columbus, the Mother of Life Conference will be held at San Diego State University’s Viejas Arena.

Speakers will include Jesuit Father Mitch Pacwa, a popular host on the EWTN network; Father Thomas J. Euteneuer, president of Human Life International; and Lila Rose, president of Live Action, a nonprofit organization that uses new media and investigative journalism to advance a culture of life.

For more information on “Nine Days That Changed the World” or to order a copy of the DVD, visit www.gingrichproductions.com or www.ninedaysthatchangedtheworld.com.