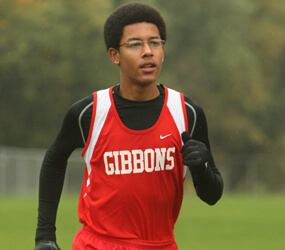 Markus Massimini’s brief cross country career for Cardinal Gibbons might not include a first-place finish, but that hardly means that he hasn’t been a winner for the Crusaders and his community.

Massimini, a senior who’s a regular on the Gibbons honor roll, played basketball and soccer for the Crusaders before turning his athletic focus to running. His training mileage in the summer of 2009 wasn’t what he wanted it to be, as spare time is hard to find for this entrepreneur and volunteer.

Jeff Cheevers, the athletic director at Gibbons, said that Massmini is a “great kid who does little things in and out of school to help the community.” All one has to do for confirmation of that is to head to the youth center in Lansdowne that is operated by the Leadership Through Athletics (LTA) foundation.

LTA got off the ground thanks to the Grace family, which has ties to Gibbons. Massimini didn’t wait to become an alumnus to donate his services, as he keeps the scorebook at countless youth games at the center.

“I love basketball, and want to remain involved with the game,” Markus said. “I’m close to the Graces, and I help out with (TLA) camps and the scorebook, so that they don’t have to pay someone. I’ve helped out there since the gym opened.”

That was in 2004, when Massimini was in the seventh grade at the parish school of Our Lady of Victory.

When he’s not taking care of the books – LTA’S or his own at school – or cleaning the Gibbons campus, Massimini is working for a local caterer or operating his own lawn and yard service. He maintains close to 20 yards, mowing grass, trimming hedges and doing light landscaping.

Massimini represented Gibbons at Our Lady of Victory’s high school night. He’s a Crusader legacy, as his father, Mark, Class of ’75, played guard on some fine Gibbons basketball teams for the late Ray Mullis.

A cross country contributor in 2008, his first season, the 5-feet-9, 130-pound Massimini has grown into the Crusaders’ No.1 runner this fall. His best finish thus far has been a second place in a tri-meet against Boys’ Latin and St. John’s Catholic Prep.