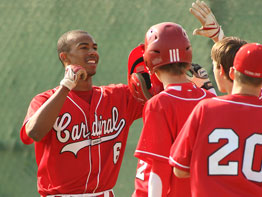 The Cardinal Gibbons School, home of Babe Ruth, has been turning heads this season in the MIAA A Conference baseball league.

The team is fighting to make a bid for the playoffs, where each game means advance or go home. It is baseball at its best on Wilkens and Caton avenues, and the fan base grows stronger each game.

Who is this team from Cardinal Gibbons and how is it that they have defeated two of the three top teams in the league and still are hanging on to make a playoff berth?

The Crusaders are 5-8, 18-9-0 overall as of April 27. They are coached by Lee Schwarzenberg, who is in his eighth season and lives and breathes the game of baseball.

The Crusaders jumped out to an early 8-0 run and things were looking good for this young team, but the tides turned in April with losses to Good Counsel and Archbishop Spalding High School, Severn, until April 14, when Calvert Hall College High School, Towson, came to Gibbons’ home field.

The Crusaders rolled over the nationally ranked Cardinals 11-7, handing them their first league loss. The Crusaders had the Cards by a score of 11-4, but the Cardinals fought back to bring the score to 11-7, forced a bases loaded scenario but then struck out on a stellar pitch from Ryan Staton. Staton threw 130-plus pitches that day – a day that became the highlight of Coach Schwarzenberg’s baseball career.

From there, the Crusaders hung tough with Archbishop Spalding, though lost twice and split with Archbishop Curley, recently putting up a 10-1 win on April 23 over the Friars and firing again with a big 5-3 win over The John Carroll School, Bel Air, just two days later.

The team is driven by senior pitcher Staton, a right-handed hurler who keeps it under control at all times and does not seem to panic in stressful situations. Staton is 8-2 on the season.

The battery of Staton and junior catcher Andrew Parker is a true strength of the team. In fact, Parker has a throw down to second base of 1.8 seconds; the average is 2.0 seconds.

Junior Robbie Harris, a left-handed batter, who was once hitting .680 was averaging .500 in late April. He plays short and third, and he leads the team in doubles.

Schwarzenberg has a number of sophomores in the lineup, which is both good and bad news. On the downside, the kids are inexperienced and react too fast at times. On the upside, the youthfulness will lead to confidence and experience as future seasons unfold.

Stepping up for the team is junior Blake Thompson, a center fielder with blazing speed, a quick glove and hitting with power at .400. Thompson teams up with sophomore Dominic Fratantuono in left field and sophomore Brian Smith in right.

John Marshall is the team’s lead-off man. A junior, Marshall is leading the team in steals and on-base average.

Gibbons just added a fresh/soph team this year – a sign of great things to come for the Crusaders, who struggle to compete with the bigger schools in the league.