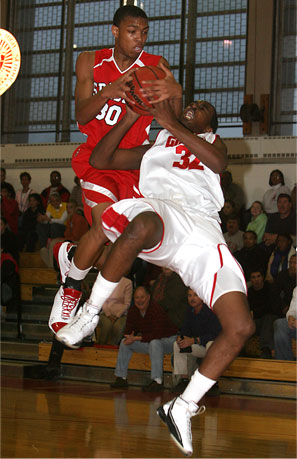 Look out for The Cardinal Gibbons School this season. The MIAA A Conference Crusaders are lightning fast, they hustle to the ball, they’re scrappy and they can jump.

It was that combination that allowed Head Coach Jeff Cheevers’ Baltimore Crusaders to hold on to a 54-50 MIAA and Baltimore Catholic League win over Archbishop Spalding High School, Severn, at home on Dec. 2.

Before the afternoon varsity game tipped off, fans were welcomed by Baltimore icon Keith Mills, who emceed a brief presentation honoring the late Bob Flynn. Coach Flynn, who passed away suddenly almost a year ago, was an alumnus of Gibbons and its former athletic director and head basketball coach. The Gibbons community retired Flynn’s jersey, No. 42, as a way of honoring this hometown hero.

As the game got underway, it was clear that Cheevers had prepared his squad well. From senior point guard Jamar Briscoe, who snapped the ball around the perimeter with precision, to senior wing guard Perry Wright’s crashing of the weak-side boards, the Crusaders out-hustled the Cavs and looked sharp.

The multidimensional Crusaders are highly disciplined; they follow their shots and scored a number of points on quick put-backs underneath. Cheevers was not afraid to substitute. In fact, he freely played the majority of his bench, a highly unusual practice in the MIAA A Conference.