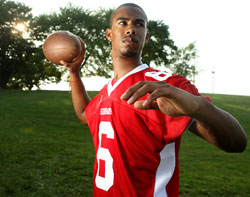 With a new coach in 1987 alum Scott Ripley, the football program at The Cardinal Gibbons School, Baltimore, is ready for a change.

The philosophy of hard work, accountability and the desire to win in the Maryland Interscholastic Athletic Association B Conference is shaping a team that has reeled from coaching changes, program challenges and disappointing losses.

With Coach Ripley’s experience in producing winning teams at Gibbons, Loyola Blakefield in Towson and Gilman School, the Crusaders started anew with a regimented summer weight-training program. However, one significant piece to the player puzzle was missing – senior quarterback Blake Thompson.

Thompson was traveling in Israel for four weeks with the Elijah Cummings Youth Program (ECYP), a venture that aims to bridge the gap between African-American and Jewish cultures.

Thompson said he learned of the program through his Hebrew Scripture teacher.

With interest and intrigue, Thompson applied to the acclaimed program, was accepted and has spent the required two years listening to speakers and learning from the Jewish and African-American communities, and participating in community service projects in the Park Heights area. Most recently, he flew into Tel Aviv with 11 other high school students to learn, firsthand, about a world thousands of miles away.

“I learned so much about me,” Thompson said. “We met kids from Ethiopia, The Sudan and Haifa. We each had to give a presentation during the trip. I gave mine on football and the football culture.”

One of the most eye-opening experiences Thompson had was his realization of how happy, lively and light-hearted the Israeli youths were.

While there, Thompson resided at Yemin Orde, a youth village located near Haifa in northern Israel that overlooks the Mediterranean Sea. Each ECYP member was paired with teens who hail from more than 22 countries, including Israel, Ethiopia, China and the former Soviet Union, among others. Together, the Israeli and American students interacted with Palestinian and Arab communities, experienced a kibbutz (a collective settlement) and toured the country.

Now Thompson and the other program graduates will take the ECYP Class of 2010 under their wings as the program continues to flourish. Thompson will be expected to participate in various speaking engagements about the program over the next year.

With a 3.5 grade point average and an early scholarship offer from Elon University in North Carolina, this could be a big year for the 6-foot-1, 185-pound team leader.

“Blake and the rest of the team know it’s time for a change,” Coach Ripley said. “We are rocking and rolling.”