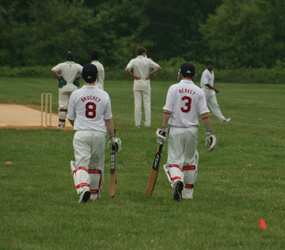 Editor’s note: This article was written by Jamie Harrison, a teacher at The Cardinal Gibbons School and the coach of the Crusaders’ cricket team.

On an overcast morning of May 16, as players from The Cardinal Gibbons School took the field, the familiar sounds of the game rolled across a sea of green grass: the crack of the bat, the slap of the ball hitting a leather glove, the click of bails being knocked off stumps …

Confused? Don’t be. Cricket is one of the fastest growing sports in America, and it is coming to a pitch near you. An easy way to understand the game is to compare it to its offspring, baseball. In baseball, it is easy to make outs and hard to score runs; in cricket, the reverse is true.

A three-hour cricket match may see over 300 runs scored, and some international matches go on for eight hours or even five days! One of our players, senior Will Foy, described the game to a reporter last year as baseball, “minus the boring parts.”

The Cardinal Gibbons School cricket team, of which I am the head coach and program director, has the distinction, for now, of being the only American school team outside of New York City. We began play on May 16 in a new youth league, also the first of its kind, and we’ll be playing all summer. League matches will be held in Baltimore, Prince George’s County and in Northern Virginia.

Our first match didn’t turn out as well as we’d hoped, but as I told the team, the true victory that day was in the historic nature of the match itself – we are the first Maryland school cricket team in over a century. By playing cricket, our school also honors its namesake, who played cricket as a youth, and former resident Babe Ruth, who played in London while visiting in 1935.

The Cardinal Gibbons School is very supportive of the sport and believes that it has much to gain by its association with the gentlemanly sport of cricket. This connection is already paying dividends, as a number of prospective students have contacted the school because of its cricket program. Learning about the game also helps generate interest in other nations, as cricket is the second most watched sport in the world, as the 2007 World Cup was seen by over two billion.

Cardinal Gibbons now teaches cricket in physical education classes, starting with upperclassmen this school year and expanding to freshman in the fall. We believe that cricket is a great fit for gym classes, because it allows the instructor to observe students both as individual participants and as parts of a team. Cricket also possesses the unique potential to appeal to all athletes, not just those who are typically large, strong or fast. In a gym class, this propensity causes many disaffected students to shrink away from active participation. This means less involvement and a discouraging, awkward experience for the student; it also makes the task of assigning that student a fair grade more difficult for the instructor.

Cricket rewards patience, technique and intelligence; stature has very little to do with eventual greatness. This encourages all students to participate and everyone wins. Ask your child’s school about cricket – the game is easy to learn, fun to play and indoor sets are set up in a matter of seconds. Your school can acquire one online for less that $100 – or you could get them started by donating one.

So, get ready for the return of cricket, Maryland. And the next time someone tells you about a high school team scoring over a hundred runs in its innings, don’t be so disbelieving.