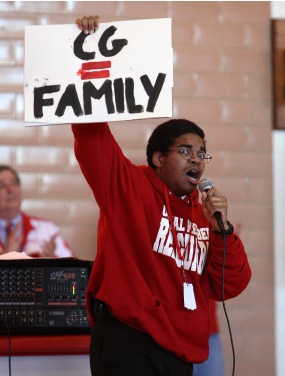 Christian Jacobs studied the class ring he had received just months ago, identifying him as a member of The Cardinal Gibbons School’s Class of 2011.
“It’s for a year we’ll never have,” Jacobs said March 6. “This is a heartbreaker.”

Three days earlier, Jacobs had learned that the all-boys school was one of 13 institutions chosen by the Archdiocese of Baltimore for consolidation.
Jacobs handed out copies of school songs for a rally inside the Gibbons gymnasium, where T-shirts read “The house that built Ruth,” a reference to the fact that baseball legend Babe Ruth attended St. Mary’s Industrial Institute, on the same grounds as Cardinal Gibbons, nearly a century ago.
Student council president Michael Thomas, Jr. displayed a sign that said: “CG=Family.”
“This,” he yelled, “is what we’re fighting for!”

Asked about the possibility of Cardinal Gibbons becoming an independent school, Bishop Madden said, “All kinds of options are being considered,” to applause.
Sean Caine, director of communications for the archdiocese, said the decision to close the school as an archdiocesan institution is final. Becoming an independent school, he said was unlikely.

“Based on the school’s current financial situation,” Caine said, “the amount of money required to maintain that facility and operate a viable program, and the school’s inability to raise substantial funds, I do not see it as a realistic option.”
Sagging for years, enrollment stands at 297students, about one-third of capacity. Gibbons announced last year that it would share a president with the neighboring all-girls Seton Keough High School. That plan was eventually nixed; the schools now split some classes.

“Serious consideration,” Caine said, “was given during the last year to a co-educational model that would have merged the two schools. At the end of the day, they (the two schools) just didn’t think it was a workable solution.
“Those parents,” Caine continued, “chose same-sex schools. We just didn’t have confidence that we wouldn’t be, in essence, determining the fate of two schools instead of one in making that decision.”

Principal David Brown said that he was not prepared for news that Gibbons would close.
“When it came, I was absolutely shocked,” said Brown, who is also serving as Gibbons president
The school balanced its budget this year for the first time in five years, after cutting 10 employees.

Caine said the school has $3.8 million in facilities needs.
“Yes,” Brown said, “there are lots of things we could do to Cardinal Gibbons, but we’ve lived without them for so long and carried on.”

The archdiocese has subsidized Gibbons by paying approximately $1 million in insurance and pension benefits for present and former employees. School representatives said the school was making inroads on paying back the money.
“It has not been able to sustain itself financially without outside help,” Caine said. “There was no indication that was going to change anytime soon.”
Caine said the school did not provide a convincing long-range plan.
Brown said that the school succeeded in providing a strong, Catholic education to blue collar families.

Neighboring Saint Agnes Medical Center denied rumors that it was interested in purchasing the Gibbons’ campus. Archbishop Edwin F. O’Brien said the archdiocese will work with community and schools leaders later to determine the future of consolidated school buildings.

While Brown said that supporters are raising money to keep the school open, Caine said that the archdiocese wants to start placing students in new schools.
“We have to stay focused on the reality,” Caine said. “These kids have to be enrolled and have to get registered at another school.”

Gibbons will host an open house for the receiving schools March 15.
No guarantee has been made that Gibbons’ tuition rate will carry over to their new school, Pacione said.
Romaine Smallwood Smoot moved her son, Nicholas, to Cardinal Gibbons after Towson Catholic closed in summer 2009. Now his senior year destination is unclear.
“As much money as I’ve spent, it would be my hope that my son would have completed his high school education with a Catholic school diploma,” Smallwood Smoot said.
Brown said Cardinal Gibbons will be strong amidst sadness.
“We’re trying to maintain our composure and run business here,” Brown said. “We’re trying to finish things here with a lot of dignity.”